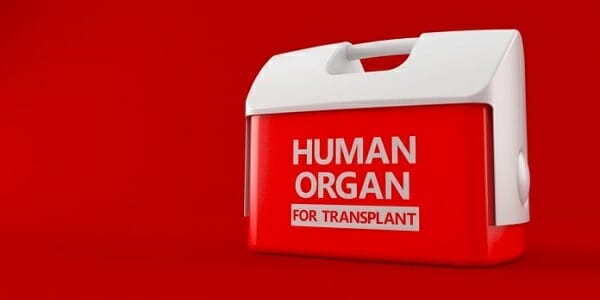 A report from The Federalist is warning that doctors at one medical school are playing "fast and loose" with a law that requires organ donors to be dead before tissue is taken.

Independent policy analyst Joe Herring has written about the policy used at the University of Nebraska Medical Center that "may be skirting laws governing the procurement of human organs for transplant."

It's that under the procedures used, he explained, the donor "may not yet be dead."

The center uses a protocol, the report says, where "the donor is removed from life support, and once the heart has stopped (circulatory death) the surgeons wait five minutes – as required by Nebraska law – to see if the heart restarts on its own."

If not, surgeons begin the organ donation process, cutting open the chest and severing the blood flow to the brain, "ensuring brain death."

Then they use a pump to restart the circulation of blood to maintain the organs for transplant, the report explains.

That means when UNMC doctors restart the circulatory system, which triggers the heart to beat, that proves "circulatory and respiratory functions have not 'irreversibly' ceased," the report said.

Supporters say the donor already is 'brain-dead" but it is the surgeon's actions, interrupting the brain's blood supply, the second step in the transplant protocol, that causes that, the report said.

"If the brain is already 'dead' as claimed, resuming blood flow would not bring it back, making this step unnecessary. The fact the step is included reveals the brain may indeed still be functioning at some level, and the organ harvesting surgeons know it," the report charged. "The intent of this macabre procedure is to preserve the body’s organs as close to living form as possible."

That gives rise to "an unthinkable horror," the report said. "According to the protocol, the opening of the chest occurs in step one, before cross-clamping the blood supply to the brain. It is therefore possible the donor is aware of what is happening to them."

There are some medical experts that remain uncomfortable with the process, because of "frequent instances of spontaneous resuscitation long after the five-minute waiting time observed by the UNMC harvesters," the report said.

In fact, in 2020 the heart of a young woman's heart restarted – while her kidneys were being removed – as she started gasping for breath.

She was given fentanyl, which killed her, a second death that was ruled a homicide, the report said.

The report said Australia has banned procedures like Nebraska's, and the American College of Physicians has recommended stopping the practice.

Dr. Heidi Klessig, an anesthesiologist, explains, "Transplant physicians who perform [UNMC’s protocol] are playing fast and loose with both the spirit and letter of the law as spelled out by the Uniform Determination of Death Act. How many families would give their loved ones over to transplant teams if they knew the grisly reality taking place behind the operating room doors?"