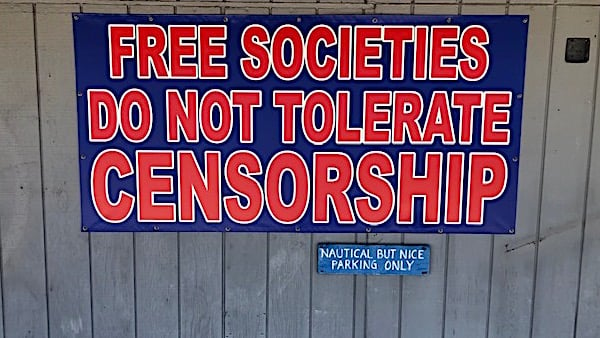 A guest on Fox Business Network said Tuesday that the left hated Elon Musk because his acquisition of Twitter made censoring conservatives “difficult.”

“I think it is. [It u]sed to be when we were growing up, free speech was something on which the right and left agreed,” Deroy Murdock said when asked by “Kudlow” guest host Sean Duffy if it was a big deal. “At some point, the left got off of that highway, went down a very dark path. These are people who are very happy to take people like conservatives to come to college campuses we don’t want to hear you speak, we’re gonna shut down your speech, sometimes physically attack people like that.”

“These are the same folks with Merrick Garland, DoJ if parents want to complain at school boards they’re domestic terrorists and must be investigated, and you see this over and over,” Murdock continued. “The Hunter Biden laptop story, rather than debate it, true or false, just shut it down, don’t let anybody hear about it two or three weeks before a national election. So, the Left has become a very much I think they’ve got a crypto-totalitarian nature to them. They hate Elon Musk because he is trying to make censorship difficult in America.”

Musk closed the deal to purchase Twitter for $44 billion in October, seeking to create a “common digital town square” on the site, according to the Wall Street Journal. After taking over, Musk announced a general amnesty for most banned accounts Thursday following the reinstatement of former President Donald Trump’s account, along with the personal account of Republican Rep. Marjorie Taylor Greene of Georgia, the Babylon Bee, comedian Kathy Griffin and commentator Jordan Peterson.

Are leftists now championing censorship because their minds are influenced by the devil?
98% (104 Votes)
2% (2 Votes)

Musk also laid off a substantial portion of Twitter employees shortly after taking control of the company, citing the company’s financial condition.

Since Musk’s takeover, numerous advertisers paused their spending, while Democratic senators pushed for a Federal Trade Commission investigation into the social media site. Musk claimed Monday that Apple threatened to remove Twitter from its App Store, and called out the tech giant’s CEO Tim Cook.

“It does. It’s kind of like back in 1989, when some guard went into the field of Hungary, snipped three pieces of wire and about three months later the Berlin Wall came down,” Murdock said. “I think that’s exactly what they’re afraid of. If you have free speech on Twitter, pretty soon all the other platforms will let people debate things on both sides of the issue. What a shock would that be.”