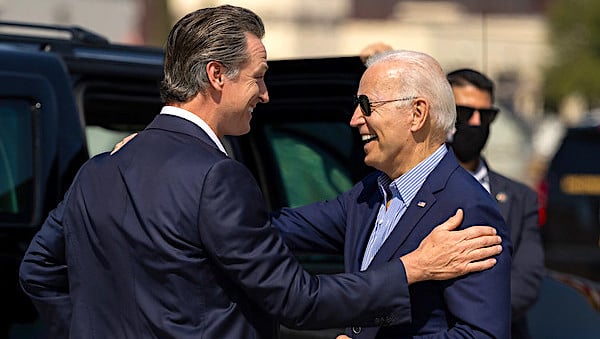 Joe Biden greets Gov. Gavin Newsom, D-Calif., as he arrives at Mather Airport on Air Force One Monday, Sept. 13, 2021, in Mather, California, for a briefing on wildfires at the California Governor's Office of Emergency Services. (Official White House photo by Adam Schultz)

California Gov. Gavin Newsom – who many pundits regard as a possible 2024 presidential candidate – is not on board with his party's campaign playbook, acknowledging a "red wave" looms amid failed messaging to voters.

"It goes to my fundamental grievance with my damn party," Newsom told CBS News reporter Major Garrett on Wednesday. "We're getting crushed on narrative. We're going to have to do better in terms of getting on the offense and stop being on the damn defense."

Newsom affirmed it feels like the tide is turning in the Republicans' favor.

Newsom said the thought of Rep. Kevin McCarthy, R-Calif., the current House majority leader, becoming House speaker "scares the hell out of me."

In his report, CBS's Garrett said the California governor, who is running for reelection with no serious opposition, "sounds like a Democrat with bigger ambitions." Newsom, Garrett noted, recently bought advertising in places such as Texas and Florida, "further elevating his profile."

But Newsom deflected Garrett's direct question about whether he intends to run for president, finally saying, "I have no interest."

The California governor said that while Biden hasn't been effective in communicating and "generating narrative," the president has conducted "a master class" in terms of "the substance."

Under the circumstances, he said, "with all the headwinds and obfuscation and opposition, I think it's been remarkable," he said of Biden's performance.

Meanwhile – with no mention of inflation, crime, the pandemic response, the border crisis and other issues on which voters say they will base their vote – Biden on Wednesday told the nation that a vote for a Republican candidate is a vote to end democracy.

Voting for Republicans, he said, essentially is supporting "the dark forces that thirst for power."

Biden brought up, once again, the Jan. 6 Capitol riot, framing it as an "insurrection" emblematic of the values of the GOP's "MAGA" base. And he claimed the recent attack on Paul Pelosi by a mentally ill, illegal alien who lives with far-left nudists in Berkeley was the latest example of MAGA-inspired violence.

"We're facing a defining moment," said Biden. "We must with one overwhelming, unified voice speak, as a country and say there's no place for voter intimidation or political violence in America."

The president said it's estimated that more than 300 Republican "election deniers are on the ballot all across America this year."

"This is not about me. ... It's about the durability of our democracy," he said.

California Gov. Gavin Newsom is campaigning for embattled Democrats in an effort to bail out a party he says is being "destroyed on messaging.” He spoke exclusively with @MajorCBS addressing questions about whether his political ambitions extend beyond the Golden State. pic.twitter.com/CzVdOhz7kX