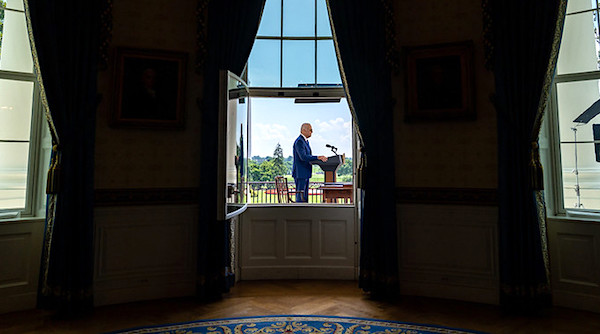 We energy realists knew that all this was inevitable, although it might have come about even faster than we expected.

A historic energy crisis is the only possible result of spurning our most important and irreplaceable fuels – oil and gas – which supply over 70% of America’s energy and are not replaceable at scale (wind and solar offer a combined 5%).

Blocking pipelines, refusing to hold federal lease auctions for exploration and production, canceling the Keystone XL oil pipeline, and looking to block oil and gas exports are just a few of the destructive energy policies that the Biden administration has adopted.

The surge in oil and gas pricing was all part of their plan from the beginning. They wanted an artificial increase to boost the attractiveness of “alternatives” such as renewables and electric cars. And it was Biden’s former boss, President Obama, who, in 2008, acknowledged that electricity prices would “necessarily skyrocket” under his proposed climate policies.

The goal: to increase the cost of oil and gas to discourage usage and force the adoption of renewables and electric cars by using government intrusion in the marketplace (taxes, subsidies, and/or regulations). This is the failed “European model” that Vladimir Putin has exploited in front of the entire world. Or as Joseph Toomey’s recent report from RealClearEnergy summarizes it: “energy inflation by design.”

Oil meets 97% of American transportation needs, is a core component of over 6,000 everyday goods, and has no significant substitute. Oil has to be used, regardless of price. Look around you: oil is integral to everything that you see. Diesel and jet fuel derived from oil are literally the lifeblood of domestic and international commerce.

There is no such thing as “transitioning” away from oil: oil is as invaluable and irreplaceable as water, which is why it’s the world’s most traded commodity.

As I show in a graphic here, the Biden administration’s characterization of a “Putin price spike” is demonstrably false. Oil prices spiked 75% from the time President Biden took office in January 2021 to Russia’s invasion of Ukraine at the end of February 2022.

President Biden himself stated the desired pathway to much higher oil prices:

Fracking, Americans should know, accounts for 90% of our domestic oil and gas production. As Toomey puts it:

“There was nothing about ramping up oil production as a patriotic duty, nothing about getting more refining capacity on line ‘or else.’ Biden’s rock-solid promise was that the oil industry—in fact, all segments of the fossil fuel industry, including natural gas and coal, would go extinct in short order.”

Why would any industry invest capital in a business that President Biden has vowed to put out of business within a few years?

Blaming the oil and gas companies for today’s high prices while not building new refining capacity (made nearly impossible by environmental laws) underscores the administration’s ignorance of how markets work.

In fact, progressives celebrated when many refineries went out of business during Covid under sunken demand, because “it was good for climate change.”

Indeed, all of this backwardness is best exemplified by California Democrat Ro Khanna. In an embarrassing flip flop, Khanna has now been demonizing the oil industry for not producing more – just a year ago, he was demanding it produce less to “fight climate change.”

Cue The Twilight Zone theme: the oil industry is now under attack for not producing enough oil by those insisting that we get away from oil and have a net-zero future.

Toomey’s report also hits another progressive energy policy disaster: the ESG obsession that is dangerously starving the oil and gas industry of capital. Combined with supply bottlenecks, rising interest rates, and workforce shortages, ESG is making new production almost impossible, while imposing a “structural increase” in the price of oil and gas.

I have exposed the gigantic holes in the ESG movement when it comes to oil investment, particularly on purported moral grounds. ESG is making the manufacturing of all U.S. products, not just oil and gas, far more costly and less economically competitive than foreign production, thus benefitting some of the world’s most repressive regimes.

What can only be described as a hatred of the oil and gas industry is also pushing young people away from working in the industry. Bloomberg reports how college students are no longer majoring in petroleum engineering, for instance, though it is the highest-paying major.

This is ominous because the Department of Energy models that American oil demand will actually slightly increase in the decades ahead, while natural gas demand will jump 13%, to over 34 trillion cubic feet. The industry will need more workers than ever.

But the overwhelming numbers in favor of oil and gas make these conclusions completely obvious. For example, we have over 270 million oil cars; only a few million run on electricity (a sector dominated by natural gas, by the way).

Toomey’s report makes clear just how dependent any sort of an “EV revolution” would make us on global mineral and metal supply chains controlled by China.

Ultimately, the renewables and electric cars push has a physics problem, not a lack of investment problem. The entire plan to phase out fossil fuels stands on shaky ground because the proclaimed “alternatives,” like wind and solar, are naturally intermittent.

If “alternatives” truly were viable, after hundreds of billions of dollars spent and decades of forced mandates, green-obsessed Germany and California would have the most “alternative” energy systems in the world. They have anything but that.

Germany has been forced to build more oil and gas pipelines and is rushing a liquefied natural gas import build-out; and for years, Germany has had the world’s highest electricity prices. California is not far behind (50-60% above the U.S. average). Oil and gas supply a staggering 75% of “green” California’s energy – more than the national average.

Cost comparisons between renewables and fossil fuels are simply not relevant because the two do not offer the same service: “usually not available” cannot be price-compared to “almost always available.” For example, the Department of Energy reports that “dispatchable” coal- and gas-based power generation are available over 85% of the time, while even on good days, “non-dispatchable” wind and solar are available just 30% of the time, needing expensive backup from more reliable gas (another cost that goes ignored). In July, Bloomberg reported that wind was generating a paltry 8% of available capacity in sweltering Texas.

Crushed by inflationary pressures, renewables and electric cars are seeing their costs soar amid rising demand for the massive amount of minerals and metals required to construct them. As we just saw with Commonwealth Wind, more and more renewable projects are “no longer viable.” This is an immense problem, especially so early into the game, so expect policy reversal and mandates for wind, solar, and EVs to eventually be forced to be pulled back (e.g., California extending the life of Diablo Canyon nuclear).

Believe what you see, and what is actually happening in the marketplace, not what you hear. Germany and California show that “alternative” energy is really just “supplemental” energy.

Jude Clemente is editor at RealClearEnergy.

This article was originally published by RealClearEnergy and made available via RealClearWire.