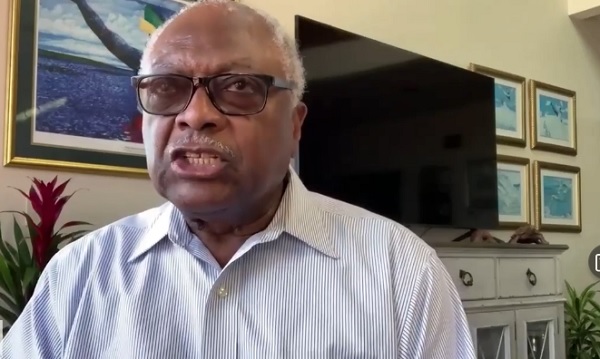 In a perspective that certainly should alarm many Americans, a leading Democrat in Congress is characterizing Republicans as Nazis.

Recall that back in the days during World War II, many civilized people, when confronted with someone who actually was a Nazi, felt the urge to assassinate.

This was logical, based on the knowledge we now have of the millions of horrific deaths imposed by those of that political persuasion. In fact, there were multiple plots developed that included the death of Adolf Hitler.

But now it is House Majority Whip James Clyburn, D-S.C., who is condemning Republicans for their "demonization" of House Speaker Nancy Pelosi, whose husband recently was attacked in their San Francisco home under strange circumstances.

According to Fox News, Clyburn said that's what happens in a country that follows "Germany in the early '30s."

The man who attacked Pelosi was arrested and has been charged. He was revealed as living in a bus with BLM banners nearby, having promoted nudism and being described by friends as jumping into a multitude of conspiracy theories.

Charged Clyburn, "This country is on track to repeat what happened in Germany when it was the greatest democracy going, when it elected a chancellor that then co-opted the media. This past president called the press the enemy of the people. That is a bunch of crap. And that is what's going on in this country."

He essentially echoed what Joe Biden had said a day earlier, when he appeared to point his finger at the GOP for the attack on Paul Pelosi, blaming the political party for violence, voter intimidation and more.

Clyburn blasted the GOP's "demonization" of Nancy Pelosi, yet didn't express any condemnation of Biden's frequent vilification of what he calls "ultra-MAGA Republicans," who support Trump.

He claimed that Biden is condemning a "philosophy" while Trump supporters identify a person.

Echoing one of the Democrats' adopted talking points for the 2022 midterms, he claimed the election Tuesday is between democracy, which he believes would come under Democrats, and autocracy, for which he blamed the GOP.

His party's other election talking points are abortion and transgenderism, while the GOP has been focusing on the economic catastrophe that the nation has sustained under Biden's policies.

Democrats also are raising the issue of election "denialism," those who believe there were inappropriate influences on the 2020 results. But it was Clyburn who voted against awarding Ohio's electoral votes to President George W. Bush in 2005, even though Bush won the state by more than 100,000 votes.