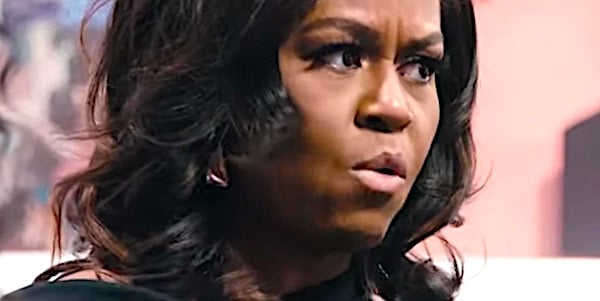 There were some serious things that happened in the Obama White House. There was planning for the moves that would have the government essentially take over health care decision making for Americans.

There also apparently was some of the scheming and manipulating that allowed the "Russia collusion" hoax to develop, and to be used against then-candidate Donald Trump.

But now on a tour hawking her new book, which already is being described as "insulting" and "full of clichés," Michelle Obama is recalling how she altered her hair style because she didn't think America was ready for her "braids."

The New York Post noted Obama said Americans still were "getting adjusted" to "having a black first family in the White House."

She said she decided, "Let me keep my hair straight."

"Let’s get health care passed [first]. They tripped out when Barack wore a tan suit," she claimed. "The great indignity, the scandal of the Obama administration. The code of ethics at a workplace, as black women we deal with it, the whole thing about, 'Do you show up with your natural hair?'"

She said she would joke with her staff members about changing her look and they would get scared.

"I would get my staff all worried, too. I was like, ‘I was thinking about getting braids,’” Obama said. "That’s the African American experience… but women in offices that are worried, ‘Should I wear skirts? Should I wear pantyhose?’ I hate pantyhose.”

Columnist Maureen Callahan at the Daily Mail said, "Allow me to save you the $35 retail (!) this book goes for: There are zero practical applications here. It's nearly 300 pages of lighter-than-air advice, full of clichés. Obama is hawking this new book as a toolkit for hard times, but her 'tools' are so obvious they're insulting."

She cited a "sampling" of Obama's wisdom:

She even indulges in that "supreme act of narcissism known as quoting oneself: 'Going high is something you do rather than merely feel.'"

The analysis said, "Personally, I loathe it. I think it holds women back. I think we are deserving of much higher, more complicated and intelligent discourses, not the equivalent of 'Live, Laugh, Love' pillows on sale at HomeGoods. Yet this so-called philosophy is baked into the culture now, often promulgated by a certain kind of smug, supercilious television host. You know the ones: Wealthy women partial to boldly colored designer suits and layered necklaces with their children's initials encrusted in diamonds. The kind of hosts we saw Obama in conversation with this week, fluffing up these girl-power vagaries — luxuries, really — without ever acknowledging that the bulk of American women have much more pressing concerns."

She continued, "You know, like heating their homes this winter, or feeding their children while being able to fill up their gas tank in the same week. Or worrying about their job stability or living paycheck-to-paycheck or dreading that one medical emergency that wipes out what little savings they have. Or how they'll swing Christmas for their kids this year.

"The young Michelle Obama, the one who grew up struggling on the Southside of Chicago, is long gone. The Michelle Obama of today is an out-of-touch hypocrite, and what's not in this book is way more interesting than what is," she wrote.

"You know, that she and her husband have an estimated net worth of over $70 million dollars. That their joint book deal alone was said to be worth $65 million, their Netflix deal potentially in the high eight or even nine figures, their Spotify deal rumored to be worth $25 million. That their media empire includes books, podcasts, TV and films, and lucrative live events. That maybe it was a mistake for her husband, in one of his first post-presidential sightings, to be photographed kite surfing off Richard Branson's private island. Or for him to reportedly take $400,000 a pop giving speeches to Wall Street — the man who once famously said, on the subject of Wall Street reform, 'I do think at a certain point you've made enough money.'"