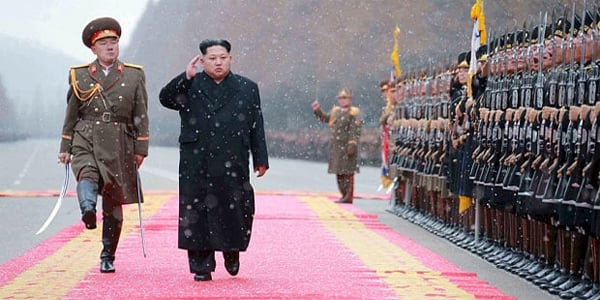 The rogue regime in North Korea on Thursday triggered evacuation warnings and railway closures in Japan after firing a barrage of at least six missiles, including an ICBM, according to reports.

The LA Times said the missiles, fired into the sea, continued a series of "weapons tests that ha[ve] escalated tensions in the region."

The launch of the intercontinental ballistic missile was a prelude to the launch of several short-range missiles, prompting the United States to extend its joint air force exercises with South Korea.

"North Korea has further dialed up its testing activity since late September, including what it described as simulated nuclear attacks on South Korean and U.S. targets. It has said its tests are meant as a warning against the United States' military drills with allies South Korea and Japan, exercises that it portrays as rehearsals for a potential invasion," the report explained.

The report continued with speculation that experts believe North Korea is trying to force the U.S. to accept it as a nuclear power, and give it power to negotiate economy and security concessions.

The Biden administration responded with a promise of "costs and consequences" for North Korea.

The report explained Japanese officials had feared North Korea's missile was over its northern territory, but later revised that assessment.

Spokesman Hirokazu Matsuno explained the evacuation alerts and such were "based on a trajectory analysis that indicted a flyover."

A coalition from the free countries around the world has expressed concern that North Korea will test a nuclear device, which it is banned from doing by the U.N. Security Council, which also ordered that it not launch ICBMs.