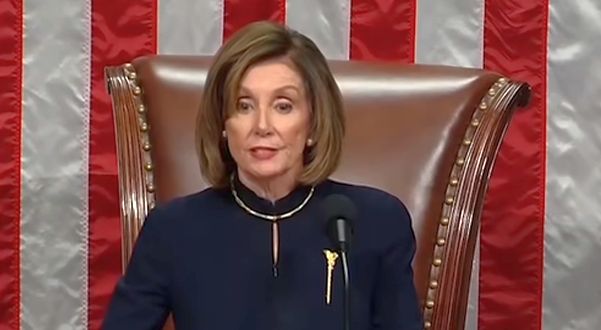 The Republican Party has locked in its control of the U.S. House for the next two years, with a majority of at least 218 seats, with several decisions still pending.

And outgoing Speaker Nancy Pelosi immediately promised she would "leverage" the votes there, now that she's out of power.

Legacy media outlets like the AP said the GOP has a "threadbare majority," a term not often used to describe the Democrats' majority of only four or five seats in the last Congress.

And the actual number in the majority party may not be known for some time yet as election systems that now operate on an election week, or election month system, not the constitutionally required election day, have yet to announce winners.

Rep. Kevin McCarthy, R-Calif., who has been minority leader and is a candidate to be the new speaker, replacing Pelosi, said, "Americans are ready for a new direction, and House Republicans are ready to deliver."

Pelosi, who kept insisting up to election day that her party would keep control of the House, said her party "will continue to play a leading role in supporting President Biden’s agenda — with strong leverage over a scant Republican majority."

The Washington Examiner said it was unclear whether she could seek another leadership position in her party, and she is expected to announce her plans at some point.

But whatever those are, they will be with the minority in the House.

The report continued, "The new majority will usher in a new group of leaders in Washington. If elected to succeed Pelosi in the top post, McCarthy would lead what will likely be a rowdy conference of House Republicans, most of whom are aligned with Trump’s bare-knuckle brand of politics. Many Republicans in the incoming Congress rejected the results of the 2020 presidential election."

Media outlets often explain those concerns were rejected by courts and elections officials.

But the facts remain that there were at least two influences on the 2020 election that, polls and surveys confirm, almost undoubtedly took the win away from President Trump and gave it to Joe Biden.

One was the FBI's decision to interfere in the election by insisting that Big Tech suppress "Russian disinformation." However, those reports, about the Biden family's extraordinary income of millions of dollars from suspect sources in Russia and China, were not disinformation.

They were accurate reports on the family's activities, which even Trump critics later admitted – when it was too late to give voters accurate details in time for the election.

The second influence was Mark Zuckerberg's decision to hand out some $400 million plus to local elections officials. They often used that money to recruit voters from Democrat districts.

Further, state officials variously decided to simply ignore their own state laws and regulations regarding absentee or mail-in ballots.

Biden also threatened the GOP, with, "I'm not going to change anything in any fundamental way."

Pelosi, an octogenarian, promised in 2018 to limit herself to four more years as her party's leader.

Biden credited his party's showing in the midterms, a result that was better than pollsters had predicted, on concern over the "right" to abortion, which the Supreme Court this year ruled never existed in the Constitution.

As a result many Democrats campaigned on women's "rights" to kill unborn children.

A column by Jordan Boyd at the Federalist immediately proposed an assignment sheet for Republicans in the House.

Many of these plans already have been discussed by members of the new majority.

The list includes impeaching Biden's attorney general, Merrick Garland, who openly has worked against parental rights and conservative issues even though he supposed to be a neutral attorney general.

"Everything Garland has done as attorney general has been mendaciously political, from smearing parents who speak out at school board meetings as ‘domestic terrorists’ to targeting peaceful anti-abortion activists while doing nothing about actual pro-abortion vigilantes attacking churches and crisis pregnancy centers," The Federalist’s John Daniel Davidson wrote in October. “He has to be stopped, and a determined GOP-led Congress is the only thing that can stop him."

Another is to defund the FBI, which has been political for years, at least since it colluded with Democrats during the 2016 election to make up false stories about then-candidate Trump – and then used those claims in court as evidence.

At the time, one FBI agent crowed to another about how the FBI would not let Trump become president.

Also, Pelosi's partisan committee assigned to create allegations against President Trump over the riot at the Capitol in January 2021 should be disbanded, the column noted.

"Now that the GOP controls the House, it’s time to disband the committee, which always defied House standards, and devote the time spent on theatrical displays of partisanship to more important things."

"For years now, Republicans Chuck Grassley and Ron Johnson have led investigations into Hunter Biden’s sketchy overseas business dealings. Because of their work, Grassley and Johnson were smeared by Democrats and the corporate media for uncovering the Biden family’s profiteering from overseas oligarchs, including those linked to the Chinese Communist Party and the wife of the Moscow mayor."

The column said now's the time to use the evidence that is there.

Other topics include investigation "COVID tyrants" over their lies about the Chinese pandemic, and the treatment for it, the border crisis and its "enablers," the Afghanistan debacle and more.

"Because Republicans will be limited in what they can and can’t pass, they should leverage their stopping power to ensure Democrats don’t get what they want. That means refusing to work with the other side of the aisle on anything until demands to secure the border, reduce inflation, punish crime, protect life in the womb, and keep women’s spaces for women are met," it said.

And, of course, "Impeach Biden."

"There are myriad reasons to impeach the president, and the GOP should use those to their advantage. Impeachment would likely be vehemently (and hypocritically) opposed by Democrats, but it would send a message that Republicans in this country won’t take government-led attacks on our Constitution or law-abiding Americans sitting down."

A tiny Democrat majority in the Senate never would remove Biden from office, but he then would be, as Pelosi boasted about her attacks on President Trump, "impeached forever."