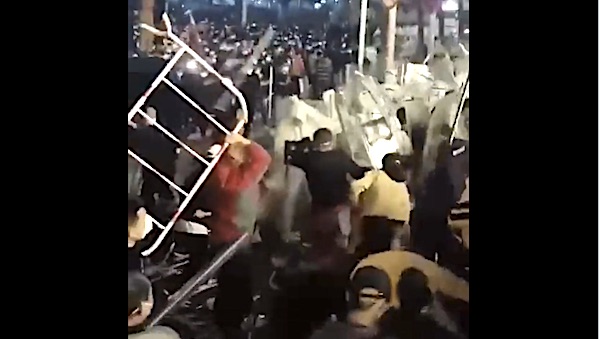 Chinese authorities eased on some COVID-19 restrictions, including one that barred tenants in apartment complexes where infections break out from leaving their compound, on Monday after a weekend of protests, according to media reports.

Chinese General Secretary Xi Jinping affirmed the “Zero Covid” policy that has sparked nationwide protests, a rare instance of coherent outburst against the authoritarian Chinese regime, The Associated Press reported. City authorities have arrested and detained an unknown number of protesters, but their decision to roll back some of China’s expansive lockdown policies appeared aimed at quelling the unrest.

The Chinese government has not commented publicly on the protests, or of a disastrous fire in Urumqi, a city in Xinjiang, that killed at least ten people after quarantine barriers and locked doors allegedly prevented tenants and firefighters from escaping, according to the AP. Analysts believe the fire ignited protests, which began on Friday and appeared to quickly diffuse to cities across the country, including Shanghai, China’s financial center, and the capital city of Beijing.

“Passages must remain clear for medical transportation, emergency escapes and rescues,” Wang Daguang, a city official in charge of epidemic control, said, according to the state-controlled China News Service.

The fire in Urumqi, Xinjiang, the last screams of the residents who were burned to death, other residents could only stand by the window to watch, because everyone was locked at home.#TheGreatTranslationMovement pic.twitter.com/Fr1gyrpPsa

Guangzhou, a manufacturing and trade powerhouse and a center of the latest COVID-19 outbreak, also announced some populations would no longer be required to undergo mass testing, citing a need for economizing on resources, the AP reported. Businesses and markets considered in low-risk areas of Urumqi will also be allowed to open, and city authorities also said public transportation service would resume.

At the same time, police in Beijing and Shanghai escalated detentions and searches of people at protest cites, according to Reuters. Officers would apprehend people on the streets and request access to their phones, checking the devices for illegal Virtual Private Networks (VPNs) or the Telegram messaging app groups have used to coordinate protests.

On Monday, the cities were quiet, showing no signs of protest as dozens of law enforcement officers patrolled the areas hosting recent protests, Reuters reported.

Protests are erupting across China as people have had enough of the draconian zero Covid lockdowns. This is what eventually happens when people power mobilises against oppressive governments that take away freedoms and human dignity. pic.twitter.com/NsZgZTxEYT

“What you mentioned does not reflect what actually happened,” foreign ministry spokesman Zhao Lijian said when asked whether anger over the Zero-Covid policy motivated demonstrations, according to Reuters. “We believe that with the leadership of the Communist Party of China, and cooperation and support of the Chinese people, our fight against COVID-19 will be successful.”

Jinping has championed “Zero Covid” contact tracing and lockdown policy superior to the “chaos of the West.” Shanghai’s city-wide lockdown in April, confining thousands into their apartments, caused food shortages and led to protests, public outrage and looting in some cases.

The Chinese foreign ministry did not immediately respond to the Daily Caller News Foundation’s request for comment.