It's not news to anyone that "The View" on ABC is filled with anti-Trump, and-America and anti-Christian extremism.

But the show has reached a new level, with a comment from a host now that, "Jesus would be the grand marshal" of a homosexual pride parade.

The Old Testament describes the act of homosexual sex as an "abomination" and in the New Testament it's described as women exchanging "their natural sexual relations for unnatural ones."

According to a report from the Media Research Center's Newsbusters outlet, Monday's edition of the television show featured "anti-Christian bigotry and blasphemy."

The personalities aboard the show were talking about a shooting at a bar for gay customers in Colorado Springs.

"Despite admitting they didn’t know what motivated the shooter, the cast lashed out at Republicans and Christians by suggesting 'Jesus would be the grand marshal' of a gay pride parade and hinted that they’re like January 6 rioters and poor human beings," the report said.

Whoopi Goldberg, one of those on the show, said, "No motive has been released, but GLAAD and all the activists are pointing their fingers at the rise in anti-LGBTQ rhetoric and the political policies."

She said "words matter" and blamed the violence on Rep. Lauren Boebert, R-Colo., a conservative who recently was re-elected to Congress. Goldberg claimed she's been at the "forefront of dissing LGBTQ+ people."

Then joined in co-host Sunny Hostin, who claimed there are hundreds of laws proposed to "restrict LGBTQ rights," although there was no clarification whether that included proposed bans on the bodily mutilation of children who are taught to think they are transgender.

Hostin continued, "Jesus would be the grand marshal at the pride parade." 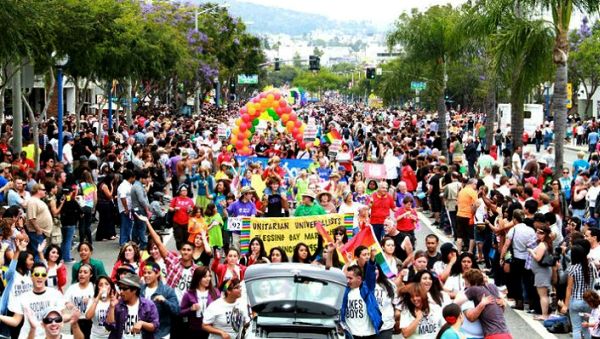 Another member of the cast, Sara Haines, said that religious people took their "self-righteous flag in the way they live and they have banged it over peoples’ head[s]."

Goldberg then took to projection, saying of Christians, "You don't want to just have your feelings. You want everybody else to join you."

Actually, pending before the U.S. Supreme Court – and other courts – are cases where Christians are defending their rights to live by their own faith – in opposition to state rules and laws that they must abide by the beliefs of the LGBTQ agenda.

Goldberg claimed, "You can scream, you can cuss, you can do all the things that you say, but you know what? Gay people are here. They're not going anywhere. There is nothing else you can do, you know. You can yell and scream, but, you know, as the Lord, as everybody was talking about, you know, made in God's image."