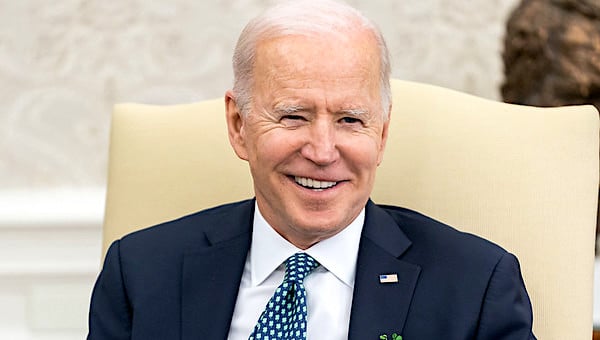 Strangely, consumer inflation of more than 8% for much of the year, a result of Joe Biden's economic policies, isn't on the list. But it is costing American families thousands of dollars more this year than last to have the same lifestyle.

Nor are the gasoline and diesel prices that have surpassed $5 and even $6 a gallon, because of Biden's constant war on the nation's domestic oil and gas industry.

Nor are the myriad problems stemming from an open southern border, or the instability a weak U.S. administration has allowed to develop around the globe.

Nor the collapsing housing market, brought on by surging interest rates, which were triggered by the Bidenflation problem.

But the White House HAS released a list of Biden's "accomplishments" that it wants to you tell "your Uncle" about this Thanksgiving.

Oddly, Biden claims credit for gas prices being down "by $1.35 a gallon since June," when they still are significantly higher than when he took office.

He also claims credit for saving Americans $3,000 on hearing aids and "billions" on "surprise overdraft charges."

He says he beat "Big Pharma" with a bill lowering prescription drug costs, although that applies mostly to seniors.

He said he "worked with Republicans" on America's infrastructure, although the Democrats' bill actually adds hundreds of billions of dollars to the nation's deficit.

He also boasts about a "science act" and "gun safety legislation," which appears not to have had an impact on the two mass shootings in just the last few days.

And he claims "progress" on "global challenges" and warns that Republicans in Congress are "EXTREME."

The propaganda campaign was launched by White House chief of staff Ron Klain:

One last item for your Thanksgiving dinner: some talking points when "that Uncle" comes "at you" about @POTUS. pic.twitter.com/P9X0wDRRZK

Online, commenters pointed out that Thanksgiving dinner this year is costing 20% more because of Biden's policies, and one pointed out, "Pathetic … calling republican family members with opposing points of view as extreme? Extreme is allowing a boy to be a girl. Extreme is my food bill. Extreme is killing a newborn. Extreme is the 'green agenda.' Extreme is your desire to squelch opposing views. Be nice & thankful!"

Yet another said, "Yeah, I'll be sure to send you my heating bill this winter since you are so proud of this, Ron."

Biden's two biggest agenda items so far, two years into his term, have appeared to be promoting abortion and promoting transgenderism, especially for children.

Bob Unruh
Bob Unruh joined WND in 2006 after nearly three decades with the Associated Press, as well as several Upper Midwest newspapers, where he covered everything from legislative battles and sports to tornadoes and homicidal survivalists. He is also a photographer whose scenic work has been used commercially.
School's mandatory LGBT indoctrination for kids goes to court
Election under investigation after votes double-counted!
Teachers told to pay more attention to blacks, now legal war erupts
Union squeezes workers into paying dues even when they want to stop
Congress to Biden administration: You have responsibility to prosecute abortionists
See more...