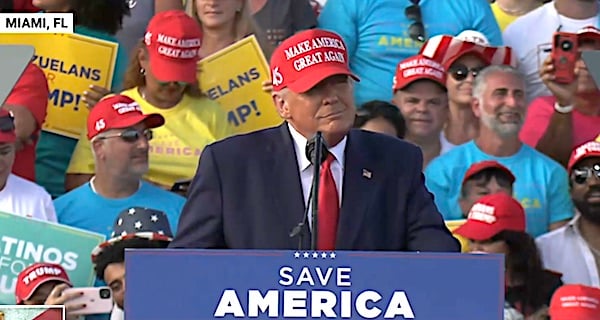 President Trump, in a followup to the midterm elections where many of the candidates he endorsed were victorious, has started making clear his positions for a possible 2024 presidential run.

He has not announced that yet, but has planned a statement that is to come next week.

And he's repeatedly said his supporters will be happy with his decision.

His comments this week come in defiance of a series of commentators and politicians who have said the Republican Party needs to move beyond him, that he is in the past.

Many of those comments have included praise for Florida Gov. Ron DeSantis, who won re-election this week.

Trump explained the background to his support for DeSantis:

Ron came to me in desperate shape in 2017—he was politically dead, losing in a landslide to a very good Agriculture Commissioner, Adam Putnam, who was loaded up with cash and great poll numbers. Ron had low approval, bad polls, and no money, but he said that if I would Endorse him, he could win. I didn’t know Adam so I said, “Let’s give it a shot, Ron.” When I Endorsed him, it was as though, to use a bad term, a nuclear weapon went off. Years later, they were the exact words that Adam Putnam used in describing Ron’s Endorsement. He said, “I went from having it made, with no competition, to immediately getting absolutely clobbered after your Endorsement.” I then got Ron by the “Star” of the Democrat Party, Andrew Gillum (who was later revealed to be a “Crack Head”), by having two massive Rallies with tens of thousands of people at each one. I also fixed his campaign, which had completely fallen apart. I was all in for Ron, and he beat Gillum, but after the Race, when votes were being stolen by the corrupt Election process in Broward County, and Ron was going down ten thousand votes a day, along with now-Senator Rick Scott, I sent in the FBI and the U.S. Attorneys, and the ballot theft immediately ended, just prior to them running out of the votes necessary to win. I stopped his Election from being stolen…

Trump also commented on some of the media, noting Fox, the Wall Street Journal and the "no longer great New York Post" were all-in for DeSantis.

"If CNN were smart, they’d open up a Conservative network, only have me on, and it would be the most successful network in History. Fox only made it because of me, Twitter only made it because of me, and even Facebook is now in the tubes, having lost almost $90 billion in value since I was taken off, which was considered one of the biggest mistakes in business over the last two years, because with Trump go tens of millions of people who believe in MAGA, who want to Make America Great Again, and Put America First!"

"U know the sticker in Pennsylvania that says, ‘I voted’? Some people are wearing them saying, ‘I thought I voted.’ Pennsylvania is a very corrupt State with voting, but nobody ever wants to check that. How does Oz (smart guy!) lose to a guy who can’t string together two sentences? They don’t want to check, because they don’t want to make me right. It happened to me in 2020, I lost one million votes with possibly one of the biggest drops in History, happening in the middle of the night."

Media outlets, some of whom have often have been critical of Trump described his comments as a "fiery screed" and claiming he "ripped" DeSantis, with his statement that the Florida governor is an "average" Republican governor.

DeSantis is, in fact, being promoted as a possible 2024 presidential candidate by many.