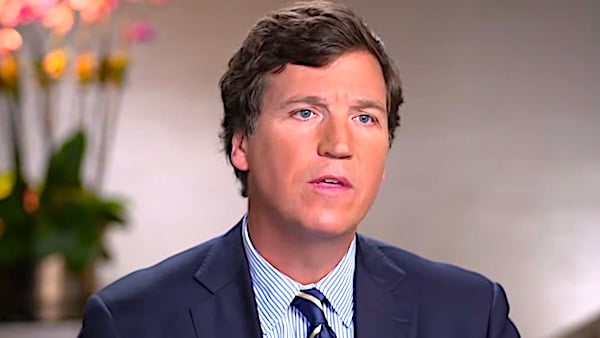 “As in China, [if] social media in the United States are censored, that’s not compatible with democracy. You can’t have censorship in a democracy, a country that censors is not a democracy. Elon Musk, not from this country, knows that. He bought Twitter with the aim of stopping censorship and restoring free speech,” Carlson said. “He just said this. There’s been a lot of censorship on Twitter, and we’re going to find out what it is. ‘The Twitter files on free speech suppression, soon to be published on Twitter itself. The public deserves to know what happened.’ Why shouldn’t we know that? Why shouldn’t we know who is shutting down free speech in a country that claims to be a democracy?”

“Well, everybody in power is panicked over this. Apple is threatening to remove Twitter from its app store,” Carlson continued. “So if Twitter can no longer get its app on the app store, there’s no more Twitter, because you access Twitter through the app. So they’re essentially threatening to shut down Twitter. Meanwhile, the White House and the media are trying to convince you that the problem is not China throwing people into concentration camps, suppressing free speech, the problem is Elon Musk, who is trying to restore free speech.”

Since Musk took over the social media platform, he has reinstated a number of Twitter accounts, including that of former President Donald Trump, The Babylon Bee and Rep. Marjorie Taylor-Greene.

Musk announced a general amnesty for most banned accounts Thursday after a second poll in which 72.4% of those who voted backed the proposal. Since Musk’s takeover of Twitter, multiple advertisers paused spending, while Democratic senators pushed for a Federal Trade Commission investigation into the social media site.

“Here’s the CIA officer, the guy who lied for a living, telling you we need more censorship, but they’re not coming out against, quote, ‘hate,’ Carlson said. “What they’re saying is we decide what you can say and what you can’t in this democracy. If you try to speak freely, we’ll crush you. That’s exactly what they’re saying.”