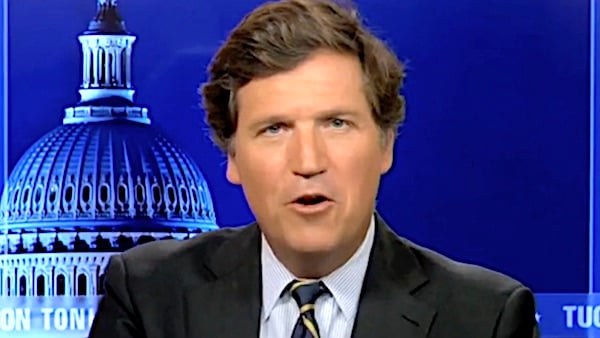 Protests erupted in China following a deadly blaze in a high-rise building that killed 10 people. Locked doors and other COVID-19 mitigation measures reportedly trapped people inside the burning building, the BBC reported.

“Unless you read the Daily Mail, which is an English paper published online, you probably didn’t know that Chinese President Xi Jinping sent tanks into a major city last night to put down protests against his rule,” Carlson said during the opening of “Tucker Carlson Tonight.” “Virtually no American media outlets acknowledged that that happened and that’s pretty weird if you think about it. Imagine, for example, that Hungarian leader Viktor Orban put tanks into Budapest to crush his political opponents. Would our media notice? Oh yeah, they would.”

Chinese authorities began cracking down on the protests Tuesday, with some protestors staring down riot vans and police, according to photos obtained by the Daily Mail.

“It would be on the front page of ‘The New York Times.’ Morning Joe would lead with it. Keep in mind Hungary is a small country, it’s got a GDP smaller than South Dakota. China by profound contrast has the biggest economy in the world. China is our main global rival, it’s a highly significant place,” Carlson continued. “Yet somehow nobody in any newsroom in America noticed when Xi Jinping decided to replay Tiananmen Square. Didn’t see it even though the pictures were on the internet. How is that possible? Could it be the American news media is covering for the government of China? Can’t say. We’ll let you make the call on that.”

Carlson then turned his attention to Apple, which faced claims from Elon Musk that it threatened to boot Twitter from the App Store.

“We can say that Apple is covering for the government of China. Apple is the most valuable company in the world. It’s got a current market cap of trillions of dollars,” Carlson said. “Financial listings describe Apple as an American company, and you can see why they do. It’s headquartered in the United States. It was founded by Americans, and to this day, it’s run by an American citizen. But those facts don’t tell the story.”

“In fact, at this point, Apple is in no sense American. Apple’s loyalty is to the government of China,” Carlson continued. “If you think that is an overstatement, consider this: Earlier this month, Apple did the bidding of the Chinese government to crush domestic protests against the communist party there. Apple did this by disabling its permanent AirDrop feature in China. So far only in China.”

Carlson noted that the “AirDrop” feature in iPhones allowed users to communicate without using cellular towers or the internet, bypassing infrastructure controlled by the Chinese government.

“In other words, again, this is not an overstatement, Apple is now an active collaborator with China’s murderous police state,” Carlson said. “When tanks roll into a Chinese city, Apple is rooting for the tanks.”