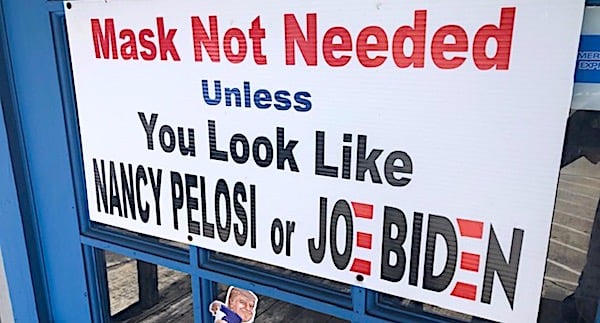 A political sign graces the entrance to the Nautical But Nice shop in Stuart, Florida, on Friday, Aug. 19, 2022. (Photo by Joe Kovacs)

Twitter has quietly halted enforcement of its COVID-19 misinformation policies, with Twitter users first discovering the change Monday night, according to CNN.

Twitter issued a variety of measures since the pandemic’s onset in 2020, including a policy that allowed users to report misinformation directly to Twitter to another taking action against tweets that alleged vaccinated individuals could still spread COVID-19. The policy, which has suspended more than 11,000 accounts and removed more than 90,000 pieces of content on the social media platform, was praised by U.S. Surgeon General Dr. Vivek Murthy as a model for how other companies could combat misinformation, according to CNN.

Twitter’s policy was similar to those implemented by Facebook and YouTube, which remain in effect, according to Reuters. The relationship between these social media platforms and White House officials, including Chief Medical Advisor to the President Dr. Anthony Fauci and former Press Secretary Jennifer Psaki, is central to an ongoing lawsuit brought by Republican Attorneys General Eric Schmitt of Missouri and Jeff Landry of Louisiana alleging that the federal government colluded with private social media companies to suppress users’ free speech rights.

CEO Elon Musk — who has styled himself as a champion of free speech online — has struggled to retain departing advertisers, who often cite concern over the future of Twitter’s moderation policies under the tech mogul. Musk alleged Monday that Apple had significantly cut back on advertising on the platform and had threatened to pull Twitter from its app store without explaining why, before he accused the company of engaging in censorship.

Are misinformation policies just another censorship tool to suppress the truth?
99% (148 Votes)
1% (2 Votes)

The tech mogul recently reinstated a variety of high-profile conservative accounts including psychologist Jordan Peterson, the satirical website The Babylon Bee and former President Donald Trump. Civil rights groups accused Musk of fostering hate speech on the platform, which could potentially drive real world violence, following his announcement that he would grant “general amnesty” to all suspended accounts on the platform “provided that they have not broken the law or engaged in egregious spam,” according to Axios.