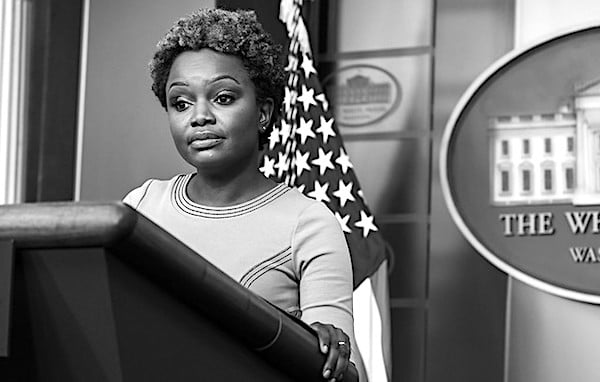 “Again, we are keeping a close eye on this. We are monitoring what’s currently occurring and we see with our own eyes what you are reporting and just for ourselves what’s happening on Twitter,” Jean-Pierre continued. “But again, social media companies have a responsibility to prevent their platforms from being used by any user citing violence, especially violence directed at individual communities as we have been seeing and the president has been very clear on calling that out. He’ll continue to do that and we will continue to monitor the situation.”

Jean-Pierre’s comments came after Musk posted that Apple threatened to kick Twitter off its App store. In other posts, Musk took aim at Apple, questioning whether the iPhone maker hated free speech and also claiming that Apple charges 30% for certain apps.

Is the Biden administration looking to censor your thoughts on Twitter?
100% (28 Votes)
0% (0 Votes)

Musk closed the deal to purchase Twitter for $44 billion in October, seeking to create a “common digital town square” on the site, according to the Wall Street Journal. Musk announced a general amnesty for most banned accounts Thursday after polling Twitter users, 72.4% of whom backed the reinstatement proposal.

Musk also reinstated a number of Twitter accounts, including that of former President Donald Trump, following a similar poll in which 51.8% backed the restoration of Trump’s account.

His takeover prompted multiple advertisers to pause spending, while Democratic senators pushed for a Federal Trade Commission investigation into the social media site.