(Image by MasterTux from Pixabay)

A federal judge has given California Gov. Gavin Newsom exactly what he requested, by striking a state law that purportedly would allow residents to sue gun manufacturers over gun violence.

The Washington Examiner said Judge Roger Benitez permanently blocked the law, finding that it was an "unprecedented attempt to thwart judicial review."

Newsom had asked for the law, and then advocated its demise, to make a point about a Texas law that uses some of the same procedures to allow residents to sue an abortionist.

Newsom's claim has been that the Texas abortion law isn't constitutional.

Benitez claimed, in his ruling, "It is cynical." "It is an abomination." "It is outrageous and objectionable."

He said there's no question that there are constitutional issues involved.

The Examiner explained, "On Dec. 8, a Texas state court threw out a lawsuit against a doctor who violated state law that prohibits abortions. Under Senate Bill 8, private citizens are able to bring lawsuits against doctors or anyone that participates in aiding and abetting an abortion. However, the Texas state court's ruling set a precedent that the citizens need to have been directly affected by the situation in order to bring a lawsuit." 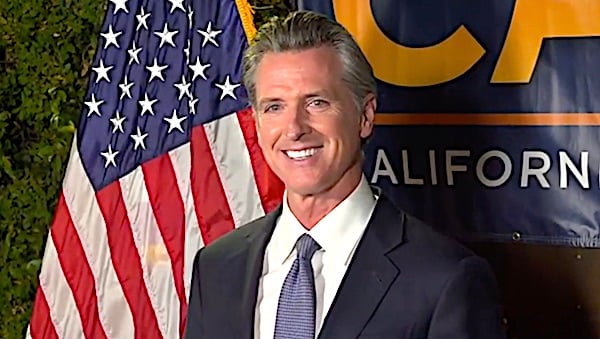 The Supreme Court had ruled that the Texas law could remain in effect.

Fox News reported the Texas measure "makes abortions illegal after a fetal heartbeat can be detected and permits private citizens to sue abortion providers or anyone else who assists in a woman's procurement of abortion for $10,000.

"This fee-shifting mechanism was designed to protect the 2021 law from judicial review to circumvent the Supreme Court's old abortion precedent in Roe v. Wade. The high court has since overturned that precedent, permitting states to restrict, or liberalize, abortion," the report said.

Newsom also claimed, "We have been saying all along that Texas’ anti-abortion law is outrageous. The provision in California’s law that he struck down is a replica of what Texas did, and his explanation of why this part of SB 1327 unfairly blocks access to the courts applies equally to Texas’ SB 8. There is no longer any doubt that Texas’ cruel anti-abortion law should also be struck down."