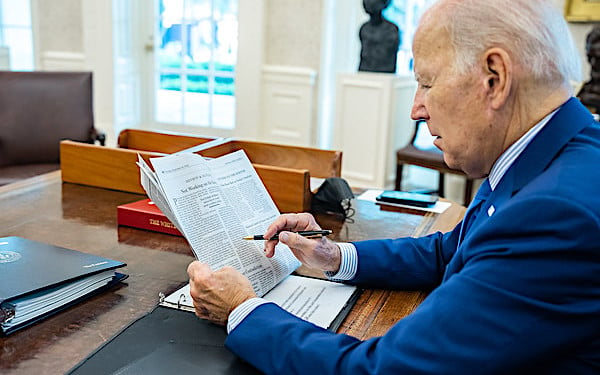 Joe Biden is only in second place – so far.

A new report reveals that the economic decline for Americans was both huge and fast under Biden's economic strategies.

But he's only in second place, with the fall in wealth faster coming just as Barack Obama, for whom Biden served as vice president for eight years, was beginning his term in the White House.

The Gateway Pundit was blunt in its report, explaining, "The U.S. household wealth is down $13.5 trillion in 2022 the second fastest decline on record. Only the 2008-2009 financial crisis was worse than the Biden 2022 economic crisis."

And the warning coming from multiple economists and corporate chiefs is that a recession is coming in 2023.

"Sadly, it won’t stop Democrats from spending more money and sinking the economy," the report said.

Citing information from MSN Market Watch, the report said Americans lost some $6.8 trillion in wealth during just the first three quarters of 2022 as stock markets plunged by 25%.

That report added, "Nominal net worth fell 4.6% to $143.3 trillion, as the market value of assets fell by $6 trillion and liabilities rose by about $900 billion. Households’ balance sheets were propped up by a 10% increase in home equity, which is the greatest source of wealth for most American families."

But, it found, "The loss in real wealth from January through September was about twice as large — $13.5 trillion in current dollars — after accounting for the rapid inflation experienced this year. Inflation makes both debts and liabilities worth less in terms of purchasing power."

The report said the 8.6% drop in real wealth was the second-fast decline on record, being beaten out by the early Obama years.

"The wealth lost during the Great Depression of the 1930s would likely hold the record if we had the data," Market Watch noted.

Biden has attacked America's economy in a number of ways – by canceling security practices so that the southern border is virtually wide open and any number of illegal aliens can be added to America's workforce, by fighting an open war with America's domestic energy production industry and putting thousands out of work, by handing hundreds of billions of dollars to so-called "green" projects, and sending similar massive amounts to Ukraine.