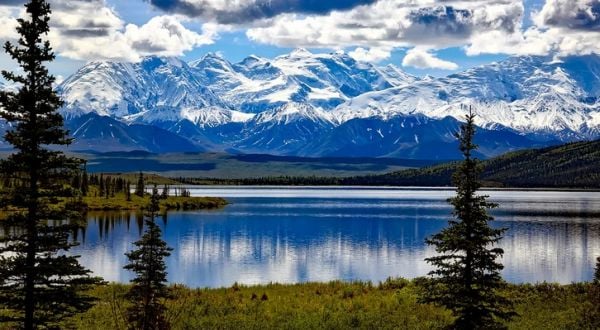 The Environmental Protection Agency (EPA) recommended prohibiting the operators of Southwestern Alaska’s Pebble Mine from disposing of waste material in the nearby Bristol Bay, a regulation that would prevent the mine from opening. However, the mine could generate billions in revenue by producing minerals that are crucial in supporting the Biden administration’s “clean energy transition.”

The EPA said Pebble Mine’s potential waste discharges would threaten nearby sockeye salmon fisheries by polluting the water and preventing the fish from spawning and reproducing, according to an agency proposal released Thursday. Despite this, the mine would extract about 1.5 billion tons of copper, molybdenum as well as other critical minerals and could deliver more than $8 billion to Southwestern Alaska, according to a report published by Northern Dynasty Minerals, the mine’s owner.

“This isn’t just about Pebble … the precedent this is setting is frightening and will be used going forward by those wanting to stop projects and will send an absolutely chilling message to the investment world about opportunities in the U.S.,” Alaska Department of Environmental Conservation Commissioner Jason Brune told the Daily Caller News Foundation.

The U.S. Army Corps of Engineers found that Pebble Mine “would not be expected to have a measurable effect on fish numbers and result in long-term changes to the health of the commercial fisheries in Bristol Bay,” in its final environmental impact statement published in July 2020. However, the EPA stated that mining waste would result in the total loss of aquatic habitats important to the sockeye salmon’s survival.

“EPA is not only taking significant tax and royalties from the citizens of Alaska but is also taking away contributions to the Permanent Fund and the dividends it provides to our people,” PLP CEO John Shively said in a statement provided to the DCNF. “In addition, EPA gives little to no consideration to the critical role copper will play in our nation’s transition to more renewable sources of power.”

The project could generate an estimated $1.7 billion in state tax revenue and $1.4 billion in federal taxes as the operator will pay both governments royalties in exchange for the rights to extract precious metals over a 20-year period, according to the report. The mine also sits on more than 107 million ounces of gold, which is worth $1,797.45 roughly per ounce, according to Business Insider.

President Joe Biden wants to generate all of the country’s electricity from green energy by 2035, up from just 40% in 2020, according to a White House fact sheet. In March, Biden invoked The Defense Production Act, a Cold War Era law, in an attempt to shore up the domestic renewable energy technology supply chain which China and other hostile nations have dominated for years.

The EPA did not immediately respond to the DCNF’s request for comment.