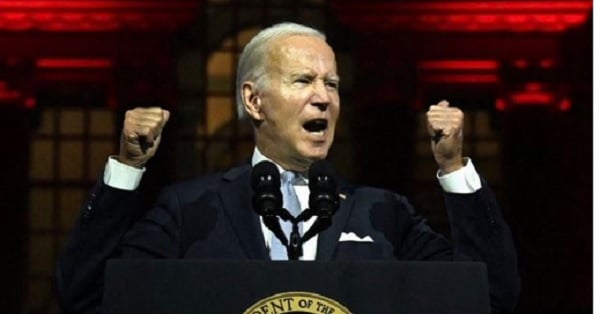 Just weeks ago, Joe Biden delivered a speech to Americans that lashed out angrily at Republicans as a threat to democracy, a speech described by critics as "reckless rhetoric" that actually was inciting violence.

Now Biden has given another speech, insisting those Republicans he blasted join him in Christmas "unity."

And he's the butt of social media jokes for his chaotic messaging.

Townhall reporter Mia Cathell cited Biden's planned topic, unity, with the quote, "Unite, you stupid sons of b------! And Merry Christmas, ya filthy animals!" while posting an image of an enraged Biden speaking just weeks ago.

Says the man who threatens to physically beat up people he meets on the campaign trail and who disagree with him. Says the man who called a voter asking him questions a "lying dog faced pony soldier" . . .

Says the man who threatens to physically beat up people he meets on the campaign trail and who disagree with him. Says the man who called a voter asking him questions a "lying dog faced pony soldier" . . .

The White House claimed Biden's latest speech was a "a Christmas address focused on what unites us as Americans, his optimism for the year ahead, and wishing Americans joy in the coming year."

"So, my hope this Christmas season is that we take a few moments of quiet reflection, find that stillness at the heart of Christmas, and look really look at each other, not as Democrats or Republicans, not as members of Team Red or Team Blue, as who we really are, fellow Americans, fellow human beings worthy being treated with dignity and respect," Biden said.

He said he wants "this holiday season" to "drain the poison" from "our politics."

RedState Deputy Managing Editor Brandon Morse noted, on social media, "Someone needs to take all the times he tried to ‘other’ conservatives, people who wouldn't take the vaccine, and more and splice in with this little virtue signal."

Biden had used a holiday message a year ago to threaten that unvaccinated Americans would be facing a "winter of severe illness and death."

"How does Joe Biden get away with this phony unity rhetoric after he smeared half the country as domestic terrorists and compared anyone who opposes his radical agenda to segregationists?" House Minority Leader Kevin McCarthy's spokesman Chad Gilmartin said, according to Fox.

"He wants you to forget his red speech ever happened," RedState writer Bonchie noted.

"Says the guy who tried to turn Americans against each other over a vaccine and often yells about ~half the country being fascists. Spare us, you old grinch," Townhall.com managing editor Spencer Brown wrote.

It was in Philadelphia that Biden ranted against Republicans, in the runup to the 2022 midterms.

And his inflammatory rhetoric earned him a warning from constitutional expert Jonathan Turley.

"Democrats and the J6 Committee are pursuing those who engaged in similar inflammatory rhetoric leading up to the January 6th riot. The airways are also now filled with Democrats warning from leaders like Hillary Clinton [] that the midterm elections are 'about to be stolen.' Likewise, many are campaigning to ban books by figures like Justice Barrett in the name of protecting free speech," he wrote.

"It is all perfectly Orwellian, but it is not particularly effective. With the over-the-top rhetoric and open bias in the media, the public is tuning out many in the press (which is at record lows in trust). This is becoming a type of primal scream session among friends, cathartic but confined," he continued.

He said, "President Biden was widely criticized for his Philadelphia speech, but he and others are now doubling down on this type of reckless rhetoric. The likely effect will be to incite further violence and to give license to the most unhinged in our society."

He pointed out that Biden claimed his political opponents "are fascists seeking to establish authoritarianism in the United States," explaining Biden's messaging was "A vote for the GOP is a vote for tyranny."