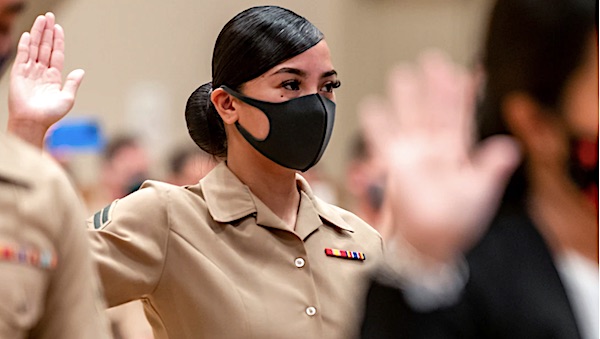 U.S. Citizenship and Immigration Services announced changes to the U.S. naturalization test on Wednesday, reducing the difficulty of the English-speaking section and editing the civics section to make the test easier for citizenship applicants, according to an unpublished notice obtained by the DCNF scheduled for publication Thursday.

The changes will lead to the English-speaking section being curated to more daily conversational subjects, as opposed to more formal subjects formerly discussed, with standardized criteria for assessment that reduce the examiner’s discretion to judge the quality of responses. “Applicants will respond to three color photographs randomly selected from a bank of approximately 70 images that directly correspond to an ordinary usage scenario,” according to the notice.

Additionally, the section on civics will be recrafted to become a multiple-choice format with each question having four options, as opposed to the previous “fill-in-the-blank” test where candidates have to answer a question from memory. The multiple-choice format, used on standardized tests for college admissions like the SAT and ACT, increases the probability of a candidate selecting the right answer by 25%, while allowing the candidates to recall the right answer more easily.

#Marines from @2dMarDiv receive their U.S. citizenship during a naturalization ceremony.

Eighteen Marines from fifteen countries and five continents swore the Oath of Allegiance and received their citizenship. #USMC pic.twitter.com/SeNofNgtPJ

“Primarily, this is about responding to suggestions from the wider community that we’ve received over the past couple of years and making it more fair,” a USCIS official told CNN in advance of the notice’s publication. The proposed test will enter a five-month trial period in 2023 before being adopted later in the year, though current citizenship applicants will use the existing test.

The measure is one of several initiated by the Biden administration to streamline the immigration and naturalization process, as well as reverse Trump-era measures that progressives have claimed were barriers to immigrants’ integration. Twelve days after taking office in 2021, President Joe Biden signed an executive order directing government agencies to “identify [and remove] barriers that impede access to immigration benefits” as well as conduct a “comprehensive review…of the civics and English language tests.”

In November 2020, the Trump administration promulgated a new syllabus for the naturalization test, raising the pass threshold to answering 12 out of 20 questions correctly (instead of 10, previously), with a larger question bank of 128 questions. Officials claimed that the test would “provide the applicant with more opportunities to learn about the United States as part of the test preparation process,” per the USCIS website.

The Trump administration’s version of the test contained additional questions about Founding Fathers such as George Washington, Thomas Jefferson and James Madison, as well as questions about the Civil War, the spread of communism, the 14th Amendment and the War on Terror, among others. The Biden administration promptly rescinded the new test months later when it took office, reverting back to a 2008 version utilized during the George W. Bush administration.

However, the Biden administration is not changing the English reading and writing sections of the natu