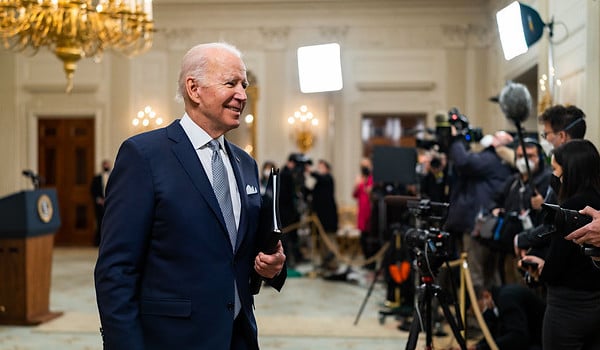 Joe Biden smiles as he walks past members of the press after his remarks on the December jobs report, Friday, Jan. 7, 2022, in the State Dining Room of the White House. (Official White House photo by Cameron Smith)

Joe Biden's administration has confirmed plans to give a lithium-battery company a $200 million grant to help along the nation's "shift to green energy" and also "ensure the United States is cultivating domestic sources of energy."

This development comes after Biden has waged a term-long war on America's energy industry, which had moved the country to energy-exporting status under the tenure of President Donald Trump.

It was Energy Secretary Jennifer Granholm who had previously claimed that the cash handout would "supercharge the private sector to ensure our clean energy future is American-made."

But, according to a report from the Washington Free Beacon, the one glitch in the presentation is that the company in question primarily operates out of China, is influenced by the Chinese government, and even is under a special watch status by the Securities and Exchange Commission.

The recipient company is Microvast Holdings and the tax money is to help build a battery separator facility in Tennessee.

But, the Free Beacon confirmed, "Financial records show the company operates primarily out of China. Microvast itself says the Chinese government 'exerts substantial influence over the manner in which we must conduct our business activities and may intervene, at any time and with no notice.' The company was also recently added to a Securities and Exchange Commission watchlist of Chinese companies that are on track to be delisted from NASDAQ for failing to comply with U.S. auditing requirements."

The money is coming from the Democrats' Infrastructure Law, which provides $1.2 billion that was to be used to help U.S. battery companies and help the domestic clean energy supply chain.

The Beacon report confirmed Sen. Marco Rubio, R-Fla., has announced the Biden administration "has a lot of explaining to do."

The senator explained, "Giving hundreds of millions of taxpayer dollars to a company whose operations are based in China that refuses to comply with American securities rules is crazy. What's more, any new technology developed in this partnership is almost certainly going to benefit China given Microvast's operations there. It is just another example of the Biden administration not understanding the threat posed by the Chinese Communist Party."

Microvast itself said in last year's SEC report that it does business "principally through our subsidiary in China."

The handout of money with uncertain results recalls the Barack Obama administration disaster with Solyndra.

Fox News outlined how that administration gave the company a $535 million loan for "a new facility" to make solar panels.

But it was revealed later that the company was planning layoffs even in the runup to the 2010 elections, but delayed them at Obama's request.

Then the loan was rearranged so that private investors would get their money back before the government in the company's collapse.

The company also was found to be inflating the value of its contracts, and being unable to compete in the world's market for such programs.