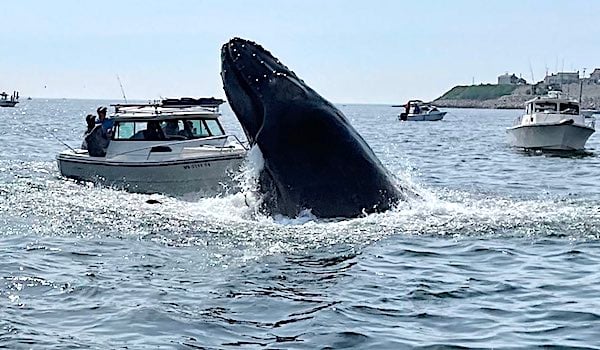 A whale breaches the water's surface and lands atop a boat off Plymouth, Masssachusetts on Sunday, July 24, 2022. (Video screenshot)

Jeff Angers, president of Sportfishing Policy, reacted this week to a new plan by Joe Biden's administration that would limit the speed for boats along much of the Atlantic seaboard to 10 knots – about 11 miles per hour.

"It's stupid," he said in a Fox News report on Biden's newest "green" plan. "It's not what government is supposed to do."

The green agenda plan purportedly would address the problem of boats running into the endangered right whale.

But officials from the government admitted that there have been only five deadly whale strikes by boats between 35 to 65 feet over the last 15 years. They noted that boats over 65 feet in length already are limited to a speed restriction.

The government statement said, "This rule is designed to reduce the risk of mortalities from vessel strikes and afford the species a greater opportunity to recover."

But Angers noted that there's less than a one in a million chance of a fishing boat hitting a whale, according to numbers from the agency proposing the change, the National Oceanic and Atmospheric Administration.

"Based on actual interactions between recreational boats and right whales, the proposed restrictions are unjustifiable, ineffective and unnecessary," he told Fox.

The speed limits would restrict boating from Florida to Massachusetts, and up to 100 miles off shore.

"This would be the greatest regulatory overreach in American maritime law," charged Frank Hugelmeyer, president of the National Marine Manufacturers Association.

"Not only are they creating a serious safety issue, they are creating a massive negative economic impact."

The danger was explained by Chris Edmonston of the Boat Owners Association. Boats, he said, can't get on a "plane" if they are going so slow, and that is the speed at which the bow of the boat cuts efficiently through oncoming waves.

"The boats are designed to ride on top of the waves," he told Fox. "This is going to make them wallow in the waves – up and down – side to side – pitching. It’s going to be hard to maintain control. You can take waves over the side."

Trey Thompson, a pilot boat captain, told Fox there will be injuries, too.

"If we run at slow speeds, any side swell is going to make these boats roll," he said.

Glenn Hughes, of the American Sportfishing Association, said the rule "will just keep people from fishing."

What used to be a hour trip to a fishing location, he said, now will be three or four hours – each way.