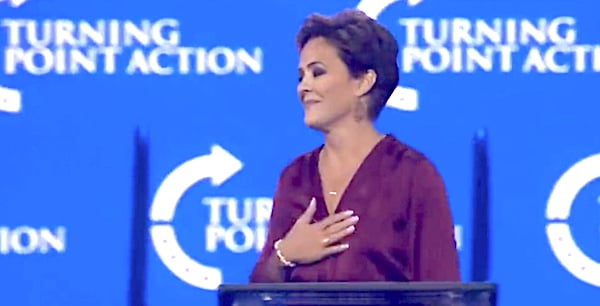 She was referring to a judge's ruling Monday that her legal challenge to Democratic Governor-elect Katie Hobbs election victory will be heard by a jury.

"We are going to trial," she told the audience at America Fest 2022, hosted by Turning Point USA.

"This is so historic, and you know what, I couldn’t have done it without you," said Lake.

"Katie Hobbs is going to have to put her hand on the Bible and swear to tell the truth."

Hobbs, as the current Arizona secretary of state, oversaw the election, which she won by 17,000 votes, according to the certified tally. Maricopa County Recorder Stephen Richer also will be required to testify.

"We have a chance to show the world that our elections are truly corrupt and we won’t take it any more," Lake said. "We're going to keep going all the way to the Supreme Court if we have to."

Maricopa County Superior Judge Peter Thompson ruled that two of the 10 claims brought by Lake can can be heard at a trial, which has been scheduled for Wednesday and Thursday. The two counts center on printers malfunctioning on Election Day and ballot chain of custody.

Lake contends "thousands of voters, disproportionately Republican, gave up voting due to the long wait times or simply avoided the polls after seeing the chaos reported."

The complaint alleges the printers didn't work because of "intentional action." The judge said she must prove someone illegally interfered with the printers, causing her to lose votes and that that there were enough lost votes to affect the election outcome.

BREAKING: Our Election Case is going to trial. Katie Hobbs attempt to have our case thrown out FAILED. She will have to take the stand & testify.

Buckle up, America.
This is far from over. pic.twitter.com/291EnXPP3U

The lawsuit cites a Runbeck whistleblower who claims hundreds of thousands of ballots had no chain of custody documentation.