In an apparent effort to downplay the crisis at the U.S. southern border, the Department of Homeland Security has erased the parole requests of more than 300,000 illegal immigrants from its reporting, charges Rep. Andy Biggs, R-Ariz.

In a letter Monday to DHS Secretary Alejandro Mayorkas, Biggs said the department has not fully complied with congressional demands for accurate border information, reported the Washington Examiner's Paul Bedard.

The congressman – who is challenging California Rep. Kevin McCarthy for the House speakership – wrote that the Customs and Border Protection agency's enormous parole figures were missing in a recent report.

"The lack of CBP data is either a mistake or a blatant attempt by your department to hide the extent of your use of parole," said Biggs. 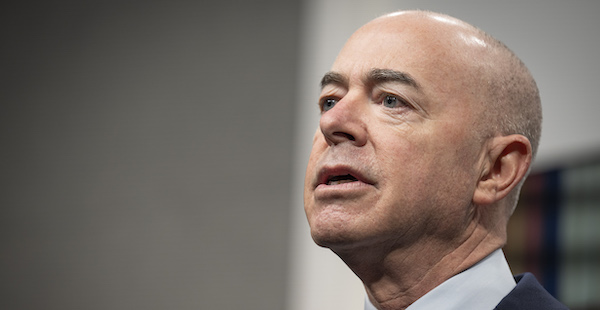 The Arizona lawmaker noted to Bedard that Mayorkas recently testified under oath that parole is "judged on an individualized case-by-case basis." But Biggs said he has seen no evidence to support the claim.

The letter comes as the Border Patrol braces for the lifting of the Trump-era policy Title 42 on Wednesday, which allows immediate exportation of asylum seekers from countries with a communicable disease outbreak.

Lawmakers, reported The Foreign Desk, say CBP officials estimate about 50,000 migrants could be waiting to cross into the United States as Title 42 expires.

Arizona Attorney General Mark Brnovich announced Monday that 19 states have filed an emergency appeal to the U.S. Supreme Court to retain the Title 42 policy. Chief Justice John Roberts has the authority to fulfill the request or refer it to the entire court.

The CBP said in its latest report that government agencies have been "managing levels well beyond the capacity for which their infrastructure was designed and resourced, meaning additional increases will create further pressure and potential overcrowding in specific locations along the border."

Single adults and families with young children could be released into communities with instructions to appear in immigration court, according to the DHS.

Meanwhile, Twitter CEO Elon Musk is using his social media platform to criticize establishment media for ignoring the border crisis as "millions of people" pour into the United States illegally.

"Why do so few report about millions of people crossing the border?" Musk wrote in response to a tweet from Fox News border reporter Bill Melugin.

NEW: Video provided to @FoxNews by TX Congressman @RepTonyGonzales shows extreme overcrowding at the Border Patrol Central Processing Center in El Paso, TX. Congressman Gonzales says he took the video on Friday, when 4,600 migrants were in federal custody. Capacity is only 1,040. pic.twitter.com/dpvH0NNseJ

The White House says it's been preparing for the lifting of Title 42 but has not offered details.

"We have been and continue to plan for its expiration next week. That's point one," said John Kirby, the National Security Council strategic communications coordinator, on Friday, as Fox News Digital reported. "Point two … is that we are making appropriate preparations for that expiration, and you will hear more from us, specifically [the Department of Homeland Security], next week about what those preparations are going to be looking like."