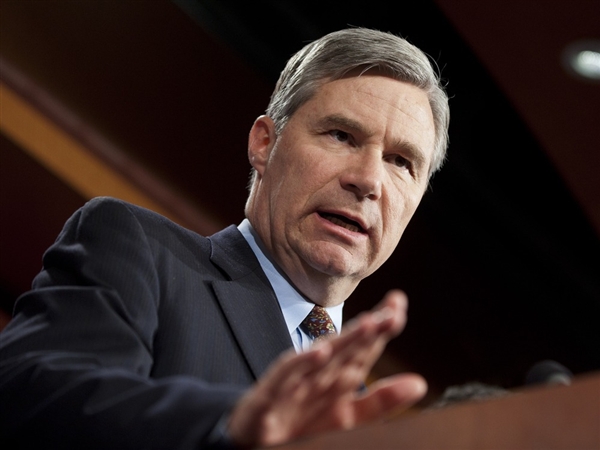 Sen. Sheldon Whitehouse, D-R.I., called for revoking a tax exemption for a conservative group for not masking up and socially distancing during the pandemic, insisted on a slew of investigations of other conservative groups, and pressed for the Internal Revenue Service to expand its reach.

A total of 176 pages of correspondence from and to Whitehouse was obtained from the IRS by the conservative watchdog group American Accountability Foundation through the Freedom of Information Act and shared with The Daily Signal.

“It’s abundantly clear that [Whitehouse] is trying to take the 87,000 new IRS agents and put them to work investigating me and my friends because he doesn’t like their politics,” Tom Jones, president and founder of the American Accountability Foundation, told The Daily Signal in a phone interview Tuesday.

‘Lois Lerner on Steroids’
Whitehouse long has been a critic of conservative, nonprofit organizations and uses an expansive definition of “dark money” groups, broadly defined as tax-exempt organizations that don’t disclose donors.

The Supreme Court, in 1958 and 2021 cases, has struck down compelled donor disclosure requirements at the state level.

The Rhode Island Democrat, first elected in 2006, has made “dark money” a central point of Senate floor speeches and often uses up his entire five-minute question period to make related speeches during hearings of the Senate’s Judiciary and Finance committees.

“It’s Lois Lerner on steroids,” Jones said of what’s in the Whitehouse correspondence, referring to the Internal Revenue Service official in the middle of the Obama-era IRS scandal over the targeting of tea party groups.

“The Lois Lerner stuff was a mid-level bureaucrat abusing [her] power to investigate conservative groups,” he said. “This is a U.S. senator basically trying to turn the heat up on investigations by the Internal Revenue Service.”

Jones’ nonprofit American Accountability Foundation describes itself as “a government oversight and research organization that uses investigative tools to educate the public on issues related to personnel, policy, and spending.”

“Tax-exempt status provides a substantial benefit to charitable organizations and reflects the federal government’s endorsement of an organization’s activities,” Whitehouse wrote to the IRS chief. “Organizations that knowingly put in danger minors entrusted to their care should not enjoy the benefits of tax-exempt status. Accordingly, I urge the IRS to review whether it should revoke Turning Point USA’s tax-exempt status.”

Many of the documents provided by the IRS to meet the public records request were heavily redacted, but the Whitehouse letter referencing Turning Point USA also appears in full on Whitehouse’s Senate website.

Rettig’s response to Whitehouse, dated March 28, 2021, asserts that the IRS wouldn’t tell him if it were investigating or otherwise acting against the conservative youth organization. The reply was not available before the FOIA request.

“You shared your concern about reports that the organization hosted COVID-19 super-spreader events in violation of local regulations,” Rettig told Whitehouse. “You urged the IRS to review and consider whether we should revoke its tax-exempt status.”

A portion of Rettig’s response was redacted. The letter then goes on to say: “Section 6103 of the Internal Revenue Code protects the privacy of tax returns and tax return information of all taxpayers. Therefore, we cannot disclose any actions we may or may not take on this information.”

“What’s important about these letters is it makes it very clear that a U.S. senator is attempting to essentially encourage the IRS to investigate his political opponents,” Jones said. “He never mentions there is a vast group of left-wing nonprofits whose funding I envy. … You don’t hear a peep from Sheldon Whitehouse about New Venture Fund, Arabella Advisors, Sixteen Thirty, a laundry list of folks on the Left.”

‘Fall Between the Infielders’
The final letter the IRS made available was an inquiry from Whitehouse to Rettig, Treasury Secretary Janet Yellen, and Attorney General Merrick Garland about why his concerns had not been investigated.

“I have described to you flagrant and persistent instances in which 501(c)(4) organizations engage in political activity—and report that political spending to the Federal Election Commission (FEC) or its state equivalents—while telling the Internal Revenue Service (IRS) that they did not engage in any political activity,” Whitehouse wrote in the letter dated May 5, 2022.

The Rhode Island Democrat referenced a 2012 report by the left-leaning investigative reporting website ProPublica, which found that 32 nonprofits reporting electioneering to the Federal Election Commission and state equivalents did not also report it to the IRS.

He said a 2022 report by Citizens for Responsibility and Ethics in Washington, a liberal watchdog group, found about two dozen nonprofits doing the same.

“This fact pattern, where tax-exempt organizations’ submissions under oath to different government entities are plainly inconsistent, should present straightforward cases for the IRS and the Department of Justice (DOJ) to pursue,” Whitehouse wrote. “Such facts present prima facie cases of noncompliance with IRS rules, and predicate ‘false statement’ investigations.”

“I request that IRS and DOJ together brief my office on this matter,” Whitehouse wrote. “I request both Commissioner Rettig and Attorney General Garland to clarify the referral policy between IRS and DOJ so that well-predicated investigations do not constantly fall between the infielders.”

The documents provided by the public records request to the IRS don’t show a response to Whitehouse’s request.

The IRS, Treasury Department, and Justice Department did not respond to inquiries from The Daily Signal for this report.

“It’s simply wrong, an abuse of his position,” Jones said. “Thankfully, the IRS hasn’t indulged in what Whitehouse is asking them to do, but you have to remain vigilant. He is a United States senator, close with the [Biden] White House.”

“At some point, the dam could break on this and conservative nonprofits could get a knock on their door from IRS agents because a U.S. senator wants them to investigate his political opponents.”

“We write to urge the Treasury Department and Internal Revenue Service (IRS) to reverse the Trump administration’s decision to eliminate disclosure requirements for certain tax-exempt organizations that engage in political activity,” the letter says. “As it stands, this policy weakens federal tax laws, campaign finance laws, and longstanding efforts to prevent foreign interference in U.S. elections.”

Rettig responded to the senators in a June 8, 2021, letter explaining that the IRS can’t help other agencies enforce campaign finance laws. The IRS commissioner wrote:

Rettig’s response letter goes on to say that unauthorized sharing of tax information could be illegal:

Congress has not authorized the IRS to enforce campaign finance laws. In addition, Section 6103 of the Code strictly limits the IRS’s ability to share tax information with other federal agencies. Accordingly, the IRS cannot disclose any names or addresses of substantial contributors to other federal agencies for non-tax investigations, including campaign finance matters, except in very narrowly prescribed circumstances. Unauthorized disclosures may lead to civil and criminal liability.

The Aug. 10, 2021, letter from the three New England senators said the IRS “needs to go after wealthy tax cheats.”

Part of the reason for the massive tax gap is that more than a decade of politically motivated budget cuts have hampered the IRS’s ability to perform its core duties—especially enforcement focused on the ultra-rich and large corporations. … Without the necessary resources, audit rates for the very richest taxpayers, those with incomes over $10 million, are nearly 80% lower than they were a decade ago, and audits of the largest companies, those with over $20 billion in assets, declined by nearly 50%.

Rettig responded more positively to this letter about greater resources for his agency, providing detailed information about audits and tax collection in a response seven days later, on Aug. 27, 2021.

“Maintaining a flat budget will continue to deprive Americans of both the nature and quality of services they deserve, producing a continuing decline in fairness and service,” Rettig told the Democrat senators. “Adding substantial multi-year mandatory funding, however, provides an opportunity to greatly improve federal tax administration for all Americans. The gross revenue collected by the IRS is approximately $3.5 trillion per year, representing around 96% of the gross revenue of the United States.”

Investing in IRS technology, data analytics, and people will improve taxpayer services, restore base enforcement functions that have declined substantially over the last decade, improve the effectiveness of our existing enforcement workforce and programs, help us tackle key compliance priorities and emerging issues, and allow us to invest in programs essential to maintaining the broad compliance framework.