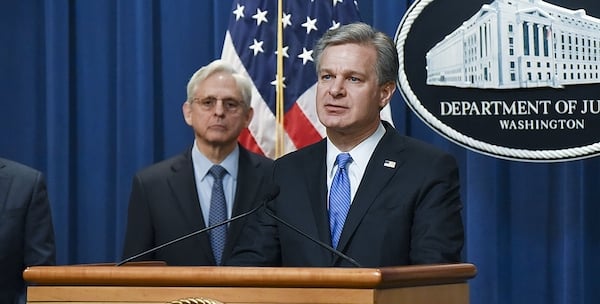 The FBI worked with the intelligence community to pressure Twitter and other social media and news media to censor the New York Post's revelations of Joe Biden's knowledge of his family's influence-peddling operation while lacking any evidence of a purported Russian "disinformation" operation.

Factual information about the foreign business dealings was discredited by the FBI and the IC both after and before the Post's blockbuster Oct. 14, 2020, story, according to the seventh Twitter Files release, reported by journalist Michael Shellenberger on Monday.

Significantly, in July 2020, the FBI's Elvis Chan – assistant special agent in charge at the office in San Francisco, where Twitter is headquartered – arranged for temporary Top Secret security clearances for Twitter executives to enable the FBI to share information about "threats" to the upcoming elections.

Further, the latest release of internal communications revealed, the FBI paid Twitter at least $3.4 million for its work.

Shellenberger recalled that Twitter Files No. 6, released Friday, showed the FBI had a system in place in which it had "constant and pervasive" contact with Twitter executives, acting as if it were a "subsidiary" of the social-media giant.

The seventh release recounts the FBI's involvement with the laptop, beginning in December 2019, when Delaware computer store owner John Paul Mac Isaac contacted the bureau after discovering evidence of criminal activity on Hunter Biden's abandoned machine. The FBI took the computer and launched an investigation. But by August, Mac Issac had not heard back from the FBI, and he emailed Rudy Giuliani, President Trump's personal lawyer at the time, who was under FBI surveillance. In early October, Giuliani gave the contents of the hard drive to the Post.

During all of 2020, the FBI and other law enforcement agencies repeatedly primed Twitter to dismiss reports of the laptop as a Russian "hack and leak" operation, as Yoel Roth, head of trust and safety for Twitter at the time, stated in a sworn declaration in December 2020.

The FBI did the same to Facebook, according to CEO Mark Zuckerberg.

Yet, as Chan has admitted, the FBI warnings of a Russian hack-and-leak operation were not based on any new intelligence.

The FBI & the Hunter Biden Laptop

How the FBI & intelligence community discredited factual information about Hunter Biden’s foreign business dealings both after and *before* The New York Post revealed the contents of his laptop on October 14, 2020

In fact, Twitter insisted publicly that there was no evidence to support claims by journalists of foreign influence on its platform.

It was after repeated pushback by Twitter regarding claims of foreign interference that Chan arranged for temporary Top Secret security clearances for Twitter executives so the bureau could share information about threats to the upcoming elections.

When the Post published the laptop revelations Oct. 14, 2020, Roth said in an internal communication that the story "isn't clearly violative of our Hacked Materials Policy, nor is it clearly in violation of anything else," but he said "this feels a lot like a somewhat subtle leak operation."

Jim Baker – the former FBI attorney who was then Twitter's senior general counsel – replied to Roth, insisting the Hunter Biden materials were either faked, hacked or both, and violated Twitter policy.

However, Shellenberger observed it's inconceivable that Baker believed the messages on the laptop were either fake or hacked. The FBI had had possession of the laptop for 11 months, as documented by a subpoena.

It likely would have taken a few hours for the bureau to confirm that the laptop had belonged to Hunter Biden, wrote Shellenberger, arguing it took only a few days for journalist Peter Schweizer to do it.

By Dec. 2020, Baker and his colleagues even sent a note of thanks to the FBI for its work. pic.twitter.com/ZEASt2aXXm

Shellenberger cited a message from Baker reporting the FBI's payments for the use of Twitter staff time.

The pressure from the FBI on social media platforms continues, Shellenberger said.

In August 2022, he noted, Twitter executives prepared for a meeting with the FBI, whose objective was "to convince us to produce on more FBI EDRs," meaning emergency disclosure requests.

EDRs amount to a warrantless search.

At the White House on Monday, press secretary Karine Jean-Pierre was asked by Fox News correspondent Jacqui Heinrich about the new revelations.

"The latest Twitter Files show that the intelligence community was actively involved in discrediting the Hunter Biden laptop story," Heinrich began. "Does it bother the president and those at the White House that a government agency like the FBI was involved in suppressing a legitimate news story?"

"Again, "I'm just gonna refer you to the FBI," Jean-Pierre replied. "I'm not going to comment from here about that."

"The latest Twitter Files show the intelligence community was actively involved in discrediting the Hunter Biden laptop story. Does it bother the president...that a government agency like the FBI was involved?"