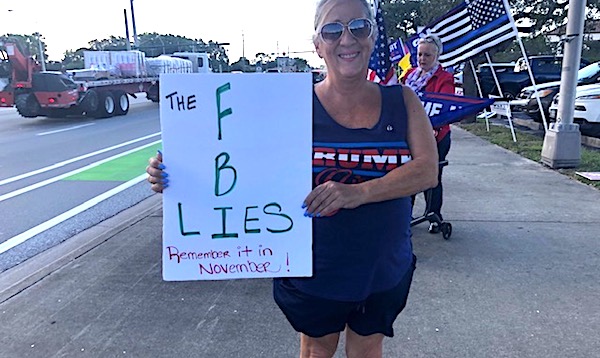 A woman displays her 'FBI Lies' sign during a rally for President Trump in Stuart, Florida, on Friday, Aug. 19, 2022. (Photo by Joe Kovacs)

A former analyst for the FBI, decorated with multiple U.S. Navy and Marine Corps medals, has sued the agency over its decision to use false claims against him to dismiss him from his position.

The case brought on behalf of Marcus Allen in the U.S. District Court for the District of South Carolina by Judicial Watch.

And it's far from the first charge that the FBI has been politicized and no longer can be relied upon for the truth. For example, the FBI worked hand-in-glove with Democrats to create the now-debunked Russia collusion claims against President Trump. It was an FBI agent, Peter Strzok, who said "we" would never let Trump be president. And it was the FBI that staged the SWAT-style raid on President Trump's home in what apparently is a dispute over custody of his presidential papers.

Eventually, Judicial Watch reported, "the FBI revoked his security clearance because apparently the FBI believes that any views contrary to its own regarding what occurred on January 6 constitutes disloyalty to the United States."

He joined the FBI in 2015, and had been providing ad hoc all-source analytical support to the FBI Charlotte Field Office Joint Terrorism Task Force.

However, the FBI asserted in a 2022 letter, "The Security Division has learned you have espoused conspiratorial views both orally and in writing and promoted unreliable information which indicates support for the events of January 6th. These allegations raise sufficient concerns about your allegiance to the United States and your judgment to warrant a suspension of your clearance pending further investigation."

The FBI then told Allen he was on leave without pay.

However, the lawsuit charges, "[Allen] was not involved in the events of January 6 and did not support them in any material way. The FBI has made no allegation or offered any evidence to the contrary."

Further, the lawsuit charges, "[Allen] has expressed no view that could be reasonably interpreted as personally expressing support or sympathy for any unlawful activity that occurred on January 6. The FBI has not identified any specific statements or actions supporting its contention that Plaintiff has done otherwise."

The issue already has been raised in Congress, with Rep. Jim Jordan, R-Ohio, writing to Wray that "Multiple whistleblowers have called it a 'purge' of FBI employees holding conservative views."

Judicial Watch said the FBI did not give Allen a chance to clear himself, despite his repeated inquiries.

The case charges the FBI with violations of Allen's First and Fifth Amendment rights, and asks that he be restored to his position.

"The FBI can’t purge employees based on political smears. Judicial Watch seeks to remind the FBI that it is not above the law with this civil rights lawsuit for Mr. Allen, a decorated Marine veteran and highly regarded FBI employee,” said Judicial Watch President Tom Fitton.