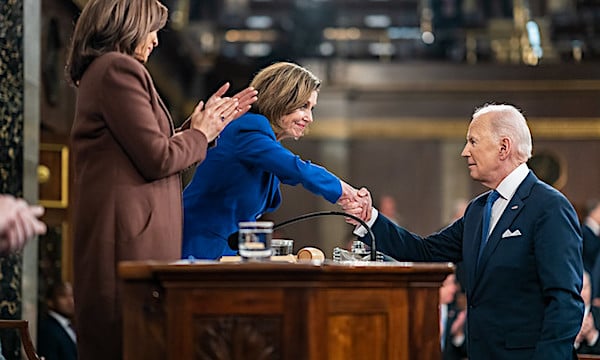 The partisan committee outgoing House Speaker Nancy Pelosi created to hunt for ways to pin the blame for the Jan. 6, 2021, riot at the Capitol on President Trump says there will be criminal referrals for the events that day.

Already, more than 900 people already have been charged with various offenses, often trespassing and vandalism, for that riot. Some have, inexplicably under America's system of justice, been held in solitary for more than a year without court hearings, court dates or bond hearings.

Now a report from Just the News reveals Democrat Rep. Bennie Thompson, Pelosi's hand-picked chairman of the committee, said the committee will "make criminal referrals to the Justice Department."

But he said there's not yet a list of who might be accused, and he suggested even witnesses who testified could be named.

Time is running out for the committee, and it's expected to die a sudden death when the Republican Party takes the majority of the House in just a few weeks.

It is partisan because Pelosi refused to allow nominees from the then-minority GOP to be on the committee. Instead, she selected two confirmed anti-Trump GOP members, Wyoming's Liz Cheney and Adam Kinzinger, of Illinois.

Cheney was blasted out of her re-election bid by a Republican colleague during the primaries, and Kinzinger dropped out of his re-election race.

CNN said a "source" claimed the allegations will be made against "the main organizers and leaders of the attacks."

The committee has focused almost exclusively on trying to find ways to blame Trump for the riot. But there's been disagreement on what to do.

The panel actually lacks prosecutorial powers, and critics of the pro-referral faction in the committee say the DOJ does not need Congress to investigate "crimes."

Some members have insisted on accusing Trump, even if it's only symbolic.

Just a couple weeks ago a key publication's editorial pointed out that the committee has accomplished only the further division of the nation.

It's members essentially have ignored the liability Pelosi may have for the damage that day, as she refused Trump's offer to have National Guard troops on hand.

She is, after all, as speaker partly responsible for the security of the building.

The committee also has held carefully staged televised "hearings" to release information it wants Americans to have, again almost exclusively against Trump and other Republicans.

So what has it accomplished?

According to a commentary by the Washington Examiner, that would be "to further divide our country by attacking honorable statesmen" like Sen. Mike Lee, a Republican from Utah.

It explained: "In perhaps the most blatantly partisan and cynical move by the committee, it deliberately leaked texts obtained by staff through its subpoena power to the press for the express purpose of trying to unseat a Republican senator.

"The texts between former White House chief of staff Mark Meadows and Sen. Mike Lee (R-UT) were leaked completely out of context to make it appear that Lee was conspiring with then-President Donald Trump to delay certification of the 2020 election. Utah Senate candidate Evan McMullin, who has been endorsed by the Democratic Party, has made these texts the centerpiece of his entire campaign, accusing Lee of betraying the Constitution by urging the White House 'to find fake electors to overturn the will of the people.'

"McMullin’s story, however, is completely false — and dishonestly so. Lee had circulated a letter to his Republican colleagues the week before Jan. 6 explaining why he was not going to join other colleagues in objecting to the certification of electors. Even after being personally attacked by Trump for rejecting this delay, Lee stood firm and followed through on his promise to certify the electors."

The commentary pointed out the divisiveness of that day, and said, "All the Jan. 6 committee has accomplished is to further divide our country by attacking honorable statesmen like Lee, who did his constitutional duty that day."

The editorial, under the headline, "The complete and total failure of the Jan. 6 committee," also noted that, "If you want to see just how out of touch with reality the Democratic Party has gotten itself over the Jan. 6 riot, look no further than former FBI agent Peter Strzok."

"The adulterous and unethical FBI agent told MSNBC this week, 'If you look at the scale in terms of the threat to democracy — I mean, 9/11 was a tragedy. We lost thousands of lives in a horrific way that we still mourn to this day, but when you look at something that is an attack on democracy, something that could actually bring about a fundamental change to American governance as we understand it, 9/11 is nothing compared to January 6,'" it said.

"So a protest that turned into a riot in which one rioter was killed by police is a very big deal compared to the mere intentional murder of thousands of innocent Americans. Got it. … Democrats think 9/11 is 'nothing' compared to Jan. 6," the pre-election commentary said.

It also cited a Harvard poll that had voters identify the most important issues.

"And the No. 1 issue facing the country today, according to Democrats? You guessed it: Jan. 6 (27%)," the publication said. "Much of the blame for the Democratic Party’s freak-out over the regrettable occurrences that day belongs to the House committee investigating the riot, which has endlessly hyped and distorted the events leading up to Jan. 6 and the actual events of that day."

While framing it against 9/11, Nicolle Wallace claims January 6 was "the deadliest attack on the U.S. capital in history."
Disgraced and corrupt former FBI agent Peter Strzok agrees, saying: "9/11 is nothing compared to January 6" and demands leaders "be on the same war footing." pic.twitter.com/lI1KTYnE2f

The Gateway Pundit noted about Strzok's claim, "This coming from a guy who opened a counter-intelligence investigation against Trump based on a phony dossier funded by Hillary Clinton."