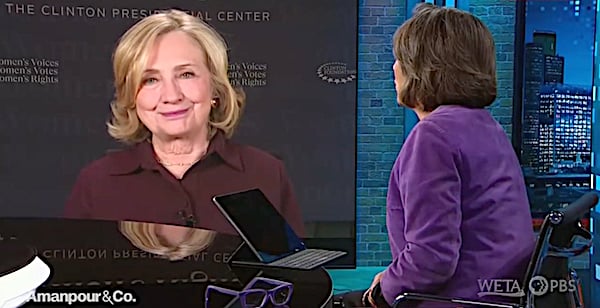 In an interview with Christiane Amanpour for PBS, Hillary Clinton compared the legal effort to protect unborn children in the United States to the oppression of women under the Islamic regimes in Iran and Afghanistan and the use of rape as a tactic of war by Russian soldiers in Ukraine.

Amanpour – previewing the Clinton Presidential Center's upcoming summit on the status of women's rights around the world – asking the former secretary of state her thoughts on the "unfinished business" of women's rights, reported Newsbusters.

Much progress has been made, Clinton replied in the interview Thursday, "but we are also in a period of time where there is a lot of pushback and much of the progress that has been, I think, taken for granted by too many people is under attack."

"Literally under attack in places like Iran or Afghanistan or Ukraine where rape is a tactic of war, or under attacks by political and cultural forces in a country like our own when it comes to women's health care and bodily autonomy," she said.

Clinton said that since the overturning of the Roe decision in June, voters have rejected "these draconian abortion restrictions."

"They do not accept them. They overturned them. They certainly want to limit the reach of the government into the most intimate, private parts of our life," she said.

Amanpour commented "it's extraordinary in 2022 that this basic right of women, half the world's population is still at risk."