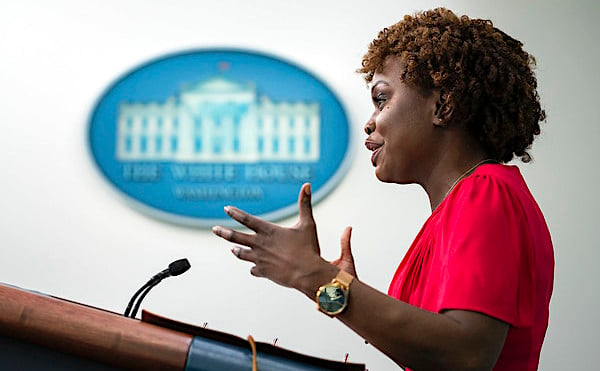 Editor’s note: This article has been updated to include comment from House Minority Leader Kevin McCarthy’s office.

Jean-Pierre refused to say when Biden visited the U.S.-Mexico border exactly when asked by Fox News’ Peter Doocy. The last time the White House was asked about it, then-Press Secretary Jen Psaki said the trip was a drive-by in 2008.

McCarthy traveled to the border El Paso, Texas, on Nov. 22 with a delegation of his Republican colleagues, where he called on Department of Homeland Security (DHS) Secretary Alejandro Mayorkas to resign or face impeachment. McCarthy extended the invitation and said that Biden asked him about the situation at the border after meeting with him alongside a bi-partisan congressional delegation at the White House Tuesday.

Federal border authorities have seen an uptick in illegal migration at the southern border, with encounters topping 2.3 million encounters in fiscal year 2022 and more than 230,000 in October.

“He’s been there. He’s been to the border,” Jean-Pierre said.

“When did he go to the border?,” Doocy responded.

Jean-Pierre then suggested that Republicans are the problem because they’re holding up immigration and border solutions in Congress. In the meantime, Biden is working to fix the crisis, she said.

“Since he took office, President Biden has been taking action to fix our immigration system and secure our border, and that’s why on day one he put forward an immigration reform piece of legislation to deal with what is currently happening at the border,” Jean-Pierre said. “But, you know, we’re not seeing that. Republicans, we’re not seeing a willingness to work with us on fixing a situation that’s been around for decades now.”

“Instead, they’re doing political stunts. That’s what they wanna do, that’s how they wanna take care of the situation. But, in the meantime the president has secured record levels of funding for the Department of Homeland Security [DHS], we have over 23,000 agents working to secure the border, we’ve taken thousands of smugglers off the streets and we’re cutting down on asylum processing times, and a number of individuals arriving unlawfully from north and Central America and Venezuela is coming down significantly because of the actions that the president has taken,” she added.

“How can someone so scripted get something so wrong? President Biden has never been to the southern border. If he had he would be forced to acknowledge the catastrophe his policies have created,” McCarthy’s Deputy Spokesman Chad Gilmartin told the Daily Caller News Foundation.