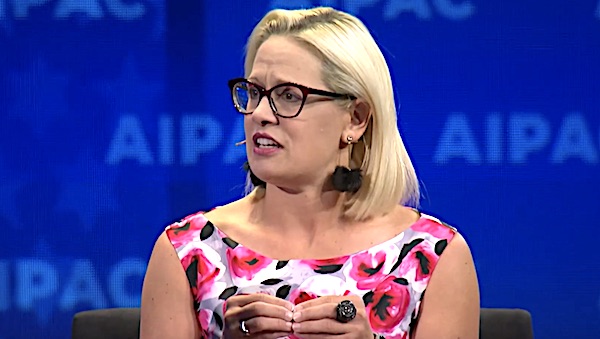 In an announcement that the Daily Mail characterized as a "massive blow for Biden," Arizona Sen. Kyrsten Sinema has announced she is leaving the Democratic Party and becoming an independent.

The change throws a wrench into the plans the party had for comfortable control of the U.S. Senate after Raphael Warnock's runoff victory earlier in the week, which would have given the Democrats a 51-49 advantage.

However, the exact impact remains uncertain since Sinema still could caucus with the party, and her announcement is not expected to change her voting habits significantly.

In a natural extension of my service since I was first elected to Congress, I have joined the growing numbers of Arizonans who reject party politics by declaring my independence from the broken partisan system in Washington and formally registering as an Arizona Independent. 1/3 pic.twitter.com/jUQHAeuxym

Over the past four years, I’ve worked proudly with other Senators in both parties and forged consensus on successful laws helping everyday Arizonans build better lives for themselves and their families. 2/3

"In a natural extension of my service since I was first elected to Congress, I have joined the growing numbers of Arizonans who reject party politics by declaring my independence from the broken partisan system in Washington and formally registering as an Arizona Independent,” she wrote on social media.

She's long been considered a centrist in Congress, refusing to back Democrat demands to kill the Senate filibuster and, along with West Virginia Sen. Joe Manchin, preventing key legislation in the Senate, which before this month was divided 50-50 and run by Democrat Chuck Schumer only because of Kamala Harris' tie-breaking vote.

According to the Daily Caller News Foudnation, "She argued that an increasingly polarizing political environment had made substantial policy progress difficult, and that registering as an independent was the best way to represent her constituents."

"In catering to the fringes, neither party has demonstrated much tolerance for diversity of thought," she said in an op-ed for an Arizona newspaper. "Bipartisan compromise is seen as a rarely acceptable last resort, rather than the best way to achieve lasting progress. Payback against the opposition party has replaced thoughtful legislating."

Two other independents in the Senate, Angus King of Maine and Bernie Sanders of Vermont, general align with the Democrats' agenda.

The Daily Mail described her as "enigmatic" and said she is not changing her values or behavior.

Her move means Manchin will continue to be key to Democrats' plans, as he has been for the last two years in a 50-50 body.

Sinema said she now will not be "constrained" by party politics, the Daily Mail explained.

"But it creates a storm for Biden, who has been celebrating a rare midterm gain for a sitting president as Democrats took a seat to go from a 50-50 split to a 51-49 majority following Raphael Warnock's Georgia runoff win," the report said.

"Senator Sinema has been a key partner on some of the historic legislation President Biden has championed over the last 20 months, from the American Rescue Plan to the Bipartisan Infrastructure Law, from the Inflation Reduction Act to the CHIPS and Science Act, from the PACT Act to the Gun Safety Act to the Respect for Marriage Act, and more," press secretary Karine Jean-Pierre said in a statement.

It also creates new significant to speculation that because of Manchin's representation of a solidly-GOP state, and his own personal views, he could change parties. Some in the GOP, in fact, have suggested just that, but he has given no indication that would be part of his future.