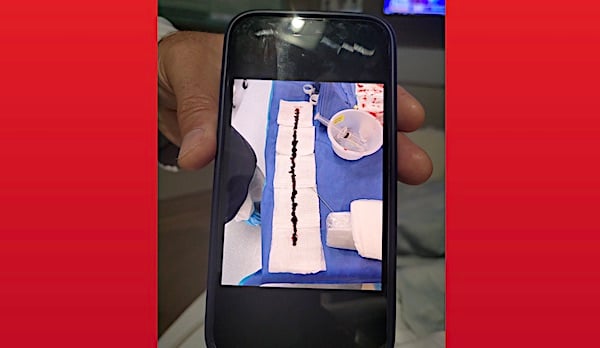 It's already documented that a study by the Food and Drug Administration confirms a link between blood clots and the Pfizer COVID-19 vaccine.

Embalmers across the country are reporting the emergence of bizarre "fibrous" clots in a substantial portion of their cases since the rollout of the COVID-19 vaccines.

Now, on social media, is confirmation that such clots are being found in those who have survived both the COVID-19 pandemic and being vaccinated.

10” clot removed from LIVE person who was vaxxed. Anyone ever seen this before vax rolled out?? pic.twitter.com/5ZwiWxgCq2

It was a known vaccination skeptic, Steve Kirsch, who reported on a long fibrous blood clot removed from a living vaccinated patient.

"10" clot removed from LIVE person who was vaxxed," he reported on social media. "Anyone ever seen this before vax rolled out??"

Shortly later, he noted the clot was "sent for analysis and SILENCE."

"I would love to know what the pathology lab thought of that monster," added one Twitter user. "As in… what is it? Looks more like a parasite than a clot."

A report from Adan Salazar on the discovery noted the clot appears to be similar to those observed by "morticians and embalmers" who have confirmed similar results.

Salazar noted, "Speaking to the Dr. Drew show earlier this month, Idaho pathologist Dr. Ryan Cole discussed the fibrous 'foot-long blood clots' taken out of autopsy patients, describing, 'What there is is unusual amounts of collected proteins…there are unusual combinations of proteins that make these very difficult for the body to dissolve.'"

They found that the incidents of pulmonary embolism, or blood clotting in the lungs, met the initial safety signal, meaning further investigation is warranted, the Epoch Times reported.

After a more thorough evaluation, the statistical signal continued to meet the criteria. Researchers said three other outcomes initially raised red flags but did not meet the statistical threshold: a lack of oxygen to the heart, a blood platelet disorder called immune thrombocytopenia, and another type of clotting called intravascular coagulation.

The safety monitoring website run by the FDA and the CDC, the Vaccine Adverse Events Reporting System (VAERS), has 1,886 reports of pulmonary embolism after receipt of Pfizer's COVID vaccine as of Dec. 9.

CDC Director Rochelle Walensky, Biden health adviser Dr. Anthony Fauci and other federal health officials, however, have downplayed the VAERS reports while refusing to answer how many people they believe have been injured or have died from the vaccines. The swine flu shot was discontinued after it was associated with three dozen deaths. VAERS has reports of more than 30,000 deaths linked to the COVID-19 vaccine.

Dr. Peter McCullough, a prominent cardiologist and epidemiologist, commented at the time on the FDA study to the Epoch Times.

He said it "corroborates the concerns of doctors that the large uptick in blood clots, progression of atherosclerotic heart disease, and blood disorders is independently associated with COVID-19 vaccination."

McCullough has called for suspension of the COVID-19 vaccines, and he believes they are the best explanation for the "sudden and unexpected" deaths and cardiac events in otherwise healthy people.

Earlier, as WND reported, a veteran funeral director in Alabama, Richard Hirschman, said he and more than a dozen colleagues in the industry had been noticing the clots.

The Epoch Times, which has spoken to others who are observing the same phenomena, reported preliminary research suggests the clots are produced by spike proteins in the body. And some believe there could be a relationship with COVID-19 and/or the COVID-19 vaccines.