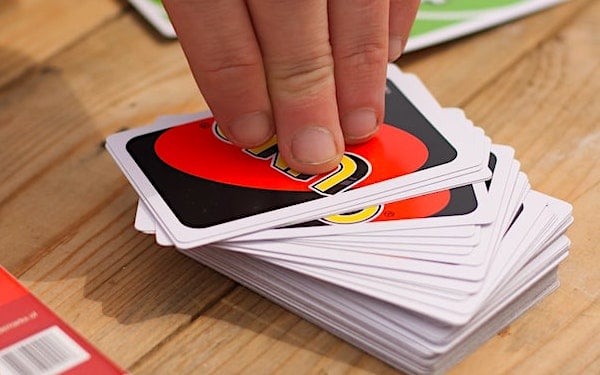 A game of UNO (Photo by Adam Mills on Unsplash)

The brand has introduced several transgender-themed products aimed at a child audience in recent years, including a recent book about boy image which included a section encouraging gender transitions for girls with body image issues. Mattel has been praised by LGBT activists and boasted of its LGBT inclusion efforts.

“One of the best ways we can contribute to a diverse, equitable and inclusive future is through the toys we design,” the company wrote in a 2020 press release. “Our most recent example is UNO’s new Play with Pride deck, which celebrates the LGBTQ+ community and includes a donation to the It Gets Better Project in honor of Pride Month. And there are many more.”

Mattel came under fire most recently for an American Girl book aimed at young girls which promoted gender transitions without parental consent and encouraged girls to stifle any discomfort they felt about males using women’s restrooms.

“Parts of your body may make you feel uncomfortable and you may want to change the way you look,” the book read, according to Fox. “That’s totally OK …You can appreciate your body for everything it allows you to experience and still want to change certain things about it.”

“While gender expression is what you show on the outside, gender identity is how you feel on the inside – a girl, a boy or someone who doesn’t quite fit into either category,” it says. “Someone whose gender is different than the sex they were assigned at birth is transgender.”

The company released the first transgender Barbie doll in May, modeled after the actor Laverne Cox, as part of Barbie’s tribute collection.

laverne cox just made history by becoming the first trans barbie doll and i would like one pic.twitter.com/6OI2iFc5QJ

“I hope that kids of all gender identities can look at this Barbie and dream,” Cox said.

Barbie also released a line of gender-bending dolls years earlier in 2019 to help children explore gender. The dolls look androgynous and can be accessorized with hair and clothes to look male, female or gender-neutral.

“This line allows all kids to express themselves freely, which is why it resonates so strongly with them,” Kim Culmone, senior vice president of Mattel fashion doll design, said in a press release. “We’re hopeful Creatable World will encourage people to think more broadly about how all kids can benefit from doll play.”

“The social and cultural validation of trans and nonbinary gender identities through this doll feels really powerful,” Molly Woodstock, a gender educator, told NPR. “It’s unarguably good that all children are being given the option to play with some sort of doll that doesn’t have a neatly assigned gender or gender roles.”

The company also joined a letter in March, alongside more than 200 other corporations, condemning “anti-transgender legislation,” which would presumably include Florida’s Parental Rights in Education bill banning classroom instruction on gender and sexuality from kindergarten through third grade, as well as a series of state-level bills restricting childhood sex changes.

Mattel did not respond to the Daily Caller News Foundation’s request for comment.