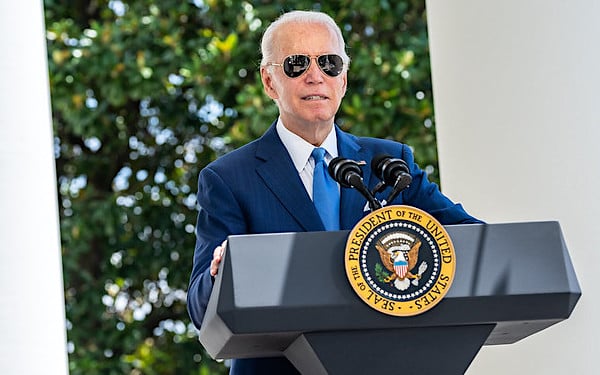 Remember that rail strike that President Biden saved us all from just in the nick of time – right before the November elections?  It was in late September that Pal Joey announced a deal between rail companies and union negotiators that staved off a “real economic crisis.”

As Joe himself explained, “The alternative was just not thinkable. If, in fact, they’d gone on a strike, the supply chains in this country would’ve come to a screeching halt. We would’ve seen a real economic crisis.” He proclaimed his handiwork as a “win” for everyone and the U.S. economy. The railroads boasted it was the “most generous contract in modern history.”

Hardly mentioned during the hoop-la over the “deal” in which rail workers won a 24-percent wage increase over a 5-year period (dating back to 2020), as well as an average $11,000 immediate payout upon ratification was this caveat:

The Association of American Railroads quietly added that “the deal is tentative” and subject to ratification by union members.

But no worries? Who in their right minds would turn this down? Greed, after all, is a disease that solely affects Republicans and “the rich” (which excludes billionaire Democrat donors).  Virtuous union bosses assured us that Amtrak would quickly resume its full schedule – especially its route in which Washington crosses to Delaware.

The election thus went smoothly enough. Peace (despite Ukraine) in our time. Afghanistan? Ho Hum. Inflation? A myth. The coming polar vortex at a time when fuel prices have escalated and there may even be shortfalls? Not yet on the radar. Sam Bankman-Fried? Still celebrated by The New Yor

But wait, you say! The rail strike was not averted – just delayed. Looks now like it will show up just about the same time as that polar vortex. The deep freeze is on the horizon – just after the Georgia Senate runoff.

NPR itself tells us that four of twelve freight rail unions have now voted against the Biden deal – the five-year contract that would have gotten him through the 2026 midterms. All 115,000 freight rail workers may be “home for Christmas.”

Surely this is BAD NEWS! About 40 percent of U.S. freight moves by rail – and the Association of American Railroads estimates a national rail shutdown could cost $2 billion a day in lost economic output – right in the heart of the holiday shopping season! Even Biden’s precious Amtrak would once again be off track.

Except that in her final glorious act, Nancy Pelosi could save the season. Congress, you see, has the power to order the rail workers back on the job. The Railway Labor Act allows Congress to take a variety of measures to keep the trains running, and Nancy might like nothing better than to impose a temporary “fix” that would kick the problem over to whoever ends up being the GOP Speaker of the House.

But would they? The facts are that a rail strike plays right into the hands of the Biden Adminstration’s war on coal. Coal travels largely by rail, you may recall.

Moreover, Joe Biden has for half a century portrayed himself as the nation’s greatest champion of Big Labor – and Dennis Pearce, president of the Brotherhood of Locomotive Engineers and Trainmen, says that any Congressional intervention would be a blow to the unions. Fortunately for the Biden Democrats, it is a long time until the next election, plenty of time for any short-term anger to dissipate.

Federal data show that about 70 percent of domestic coal is transported wholly or partly on railroad tracks. Shutting down freight rail would thus cause an abrupt halt to 70 percent of the coal that today fuels power plants, factories, and (ultimately) electric vehicles.

In Joe Manchin’s West Virginia, coal is shipped mostly by rail to the ports of Baltimore and Norfolk-Newport News. Railroads also move about 40 percent of intercity freight – food products, animal feed, chemicals, automobiles, and other consumer products for which there are not enough trucks or truck drivers to take up the slack. The state’s economy would be crushed.

In Wyoming, another state that did not vote for Biden, coal producers have already been facing shortfalls of trains to ship their low-sulfur coal to eager customers in more populated areas. Coal production in the Mountain State is down from a record 446 million tons in 2008 to under 200 million tons through October 15 of this year – despite high prices of nearly $17.50 per ton. A rail strike could force the entire state into bankruptcy.

But that’s the goal. Over a year ago, Biden’s “climate envoy” John Kerry declared that his boss’s goal was to end U.S. coal production within eight years. “By 2030 in the United States,” said in Gleneagles at COP 26, “we won’t have coal. We will not have coal plants.”

And less than a month ago, President Biden reiterated that intention, claiming that coal plants are too expensive to operate and boasting that, “No one is building new coal plants because they can’t rely on it…We’re going to be shutting these plants down all across America and having wind and solar.”

It should be obvious, then, that a rail strike would be the quickest way to destroy any remaining viability of U.S. coal production. If you cannot get your product to market, your income dwindles to zero.

Why wait eight years when you can, simply by allowing rail workers to inconvenience American consumers for a brief enough period (say, through the winter), you can conquer King Coal and put your political enemies into the poor house forever?