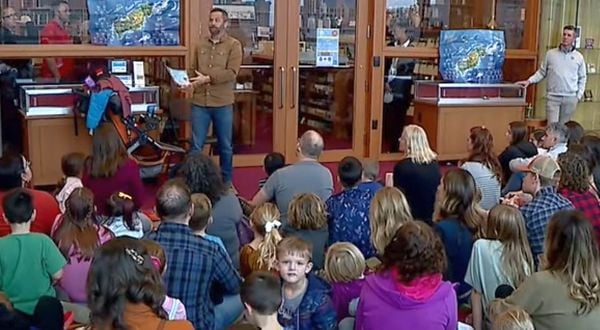 Libraries, both school and public, across the nation for years now have been promoting various "drag queen" story hours, with performers from that industry who prance for children, encourage them to explore sexual alternatives, and sometimes read them LGBT books.

Into that atmosphere, Christian actor and author Kirk Cameron stepped.

He asked for similar accommodations for readings of his book, "As you Grow," and was rejected out-of-hand by dozens of institutions, with officials often telling him bluntly that they didn't agree with his conservative message and wouldn't allow it.

But finally a library or two agreed, and the stunner was that 2,500 people showed up for Cameron's reading at the Indianapolis Public Library this week, more than the attendance at any other event the library has held.

Fox News says Cameron originally was denied or ignored by more than 50 libraries.

Then when the Indianapolis institution finally agreed to an event, publisher Brave Books shared video and images of the event on social media and with Fox News Digital.

"Yesterday, a brushfire of faith, family and freedom ignited inside the Indianapolis Public Library. It's in Scarsdale, New York, today [Friday] and it's moving across America, awakening the sleeping giant of the family of faith," Cameron said in a statement.

Cameron, former "Growing Pains" star, said, "The land of the free depends on the homes of the brave."

He previously had told Fox, "One of the things I love about our country is its commitment to the sharing of knowledge and the free expression of ideas. That is why I'm excited to bring Brave Books Story Hour to public libraries across the country."

WND reported that Cameron had declared victory in his pursuit of story hours when several libraries agreed to his requests to use their facilities.

He had explained earlier that dozens of libraries, many already promoting "drag queen" story times for children, had refused him permission to hold a story time about his new faith-based kids book, "As You Grow."

When the events were scheduled, he said, "I'm happy that the two libraries changed their decision and will allow my voice to be heard and my book to be read. I hope that this victory acts as a source of courage for Christians and conservatives across the country to be brave and not back down, making sure that we are the salt of the earth and the light of the darkness."

He said his book is "biblical wisdom through the seasons of life."

He recently told Tucker Carlson that the libraries' commitment to diversity should be questioned if they suppress viewpoints with which they don't agree.

"I'm thinking, 'Wow, if we're so committed to diversity, why am I being excluded?'” Cameron said. '"Why can't I use your facility to read my book? You're a library.'"

WND reported when the library rejections piled up those same libraries often argue in support of offensive books, from pornography to transgender-advocating works, that they don't want to "censor" speech.

But the libraries' overwhelming rejection of Cameron shows they really want to censor messages they don't support.

For example, the Rochambeau Public Library in Providence, Rhode Island, told Cameron, "No, we will pass on having you run a program in our space."

On its website, that library "promotes a regular offering for young people called 'Queer Umbrella,'" the report said.

Cameron's book, "As You Grow," drew this response from one librarian, who fully revealed the agenda of allowing only the perspectives the librarians like: "We are a very queer-friendly library. Our messaging does not align."

Another library told Brave Books, "You can fill out the form to reserve space, to run the program in our space — but we won’t run your program."

Multiple libraries simply said they were "not interested." Several cited "racial equity" and many cited their own "strategic plan" for authors, which appears to be another word for "censorship."