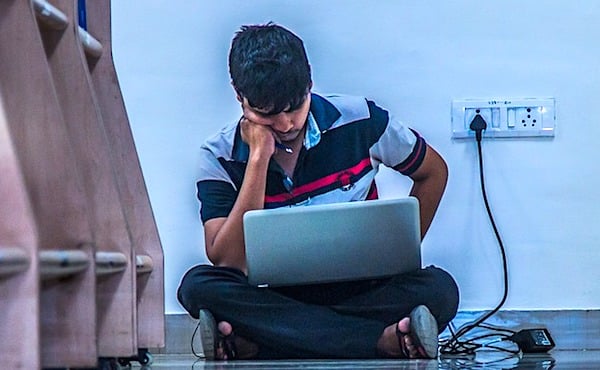 (Image by Varun Kulkarni from Pixabay)

College campuses continued their hostile attitude toward free speech in 2022 by implementing policies which restricted on-campus speech, while students disrupted speakers they did not agree with.

“One of the biggest problems we’ve seen on campus in 2022 is the return of the heckler’s veto, or attempts to silence speakers using substantial disruption or violence,” Zach Greenberg, program officer at the Foundation for Individual Rights and Expression (FIRE), told the DCNF. “We’ve seen protestors shout down, drown out, and even throw manure to shut down expression.”

In November, students successfully shut down conservative pundit Ann Coulter’s speech at Cornell University by shouting her down, playing circus music and making fart noises, the Cornell Review reported. One student yelled that Coulter’s words were “violence” and that her “ideas” were not welcome at the Ivy League campus.

Administrators attempted to quiet the students and removed those who caused disruption, and later apologized to Coulter for the students behavior.

That same month, University of California, Davis students reportedly threw feces into a campus room to disrupt a screening of Matt Walsh’s documentary “What is a Woman?” The campus police were reportedly called to the scene.

Protesters disrupted conservative pundit Tomi Lahren’s speech at the University of New Mexico by reportedly pulling the fire alarm, banging on doors and walls and attempting to break through a police barricade to enter the room, Campus Reform reported.

“The safety of our campus community and visitors is our first priority. We are deeply disappointed in the actions of those individuals who intentionally chose to disrupt a scheduled speaker and infringed upon the rights of the speaker and those who attended the event to listen and engage, vandalized University property and unlawfully pulled a fire alarm,” a university statement read. “UNM is investigating these incidents and will hold anyone who violated the law or University policies accountable.”

University of North Texas protesters disrupted Jeff Younger’s March speech and forced a police evacuation, according to a near hour long video posted by FIRE. Younger, who is in a custody battle for his son whom the mother raises as transgender, was reportedly spit on during his speech.

“FIRE urges universities to stop the heckler’s veto by protecting speakers against attempts to disrupt their events,” Greenberg said. “We also encourage students to counter speech they oppose with their own speech, not violence or disruptive tactics.”

“If freedom of speech is taken away, then dumb and silent we may be led, like sheep to the slaughter.” – George Washington

Speech First Executive Director Cherise Trump told the DCNF that universities “look[ed] for more ways to use campus policies against students and professors who dissent from the administration’s political agenda” in 2022.

“Instead of creating policies that overtly target speech like ‘free speech zones,’ they are encouraging students to use harassment policies and bias reporting systems as cudgels against one another,” she said. “We found in our Freshman Disorientation report that students are being told as soon as they enter campus that they will be offended, that racists and bigots are among them, and that many of them have biases against each other that are impossible to know about. This environment encourages students to inform on one another and, consequently, has led to an all-time high in student self-censorship.”

This semester, Hamline University refused to renew a professor’s contract for the spring semester after a student complained that he showed a portrait of the Prophet Muhammed during a lecture on Islamic art. The professor provided a content warning and gave students time to turn away from the screen to avoid the painting; however, a university administrator insisted that the use of the paining in the lesson was “Islamophobic.”

University of Wyoming administrators suspended church elder Todd Schmidt from reserving a table at its student union for a year after he used the name of a biological male student who is in a campus sorority on a sign which read there are only two sexes. While the school claimed that administrators had given the elder warnings about his speech, Schmidt told the DCNF that he was not given a warning before the suspension.

“The church elder was not banned from campus,” Chad Baldwin, UW’s associate vice president for Institutional Communications, told the DCNF. “He was suspended for one year from having a table in our student union for violating the university’s harassment policy by putting the name of one of our students on a sign at his table.”

Additionally, conservative students formed their own newspapers to counter the liberal messaging pushed by the mainstream outlets on their campuses. The DCNF previously spoke with several student leaders who opted to start their own publications in order to provide a wider platform for students to share their views.

“Just as attacks on free speech have been coming from everywhere, students are fighting back in many different ways with SLF’s support,” Cece O’Leary, SLF’s 1A Project director, told the DCNF.

Some universities have heeded SLF’s warning and adjusted their policies to better respect speech rights. The University of Maine revised its Bias Response Team to clarify it cannot investigate protected speech and linked to the university’s free speech policy, while Southern Utah University disbanded its system.

“We continue to offer programming to arm student chapters with knowledge about their First Amendment rights. We sent letters to twelve colleges this semester demanding changes to unconstitutional policies on campus,” O’Leary continued. “We submitted a public comment to the Biden administration regarding the dangers the new Title IX rule poses to free speech, and we are prepared to take legal action if and when those changes go into effect.”

Greenberg, too, told the DCNF that FIRE will continue its “advocacy and litigation efforts” in 2023 to “hold universities accountable for violating students’ free speech rights.” The University of California, Hastings amended its event policy, obtained by the DCNF, during the fall 2022 semester to prohibit use of the heckler’s veto to shut down speech.

“We will continue to use publicity to shine a light on campus administrators who abuse student’s rights,” Greenberg said. “And we’ll continue to educate universities, students, and the general public about the importance of creating a culture of free speech on and off campus.”