(Photo by Gabriel Silvério on Unsplash)

U.S. Sen. Chuck Grassley, R-Iowa, has announced another step forward in a bipartisan campaign to provide protections for the survivors of violent sexual assaults.

Grassley previously worked with Sen. Jeanne Shaheen, D-N.H., on the Survivor's Bill of Rights, adopted by Congress several years ago.

It specifies certain rights that are held by those who are victimized by federal sexual assault crimes.

Now Grassley confirms that his new Survivors Bill of Rights in the States Act has been adopted, as part of the National Defense Authorization Act. 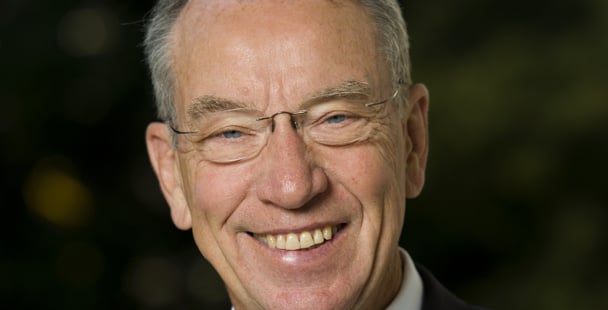 "Survivors of sexual assault deserve support and certainty that they will continue to be protected while their perpetrators are held accountable. This legislation encourages states to adopt and apply the same standard of protection across the country by providing essential forensic kits to help deliver justice," Grassley said.

Shaheen added, "Sexual assault survivors shouldn’t be further traumatized by their experience by having to jump through hoops to seek justice. That’s why I worked with Sen. Grassley to usher this bipartisan legislation through Congress to create a more uniform criminal justice system that more comprehensively supports survivors by incentivizing states to codify and standardize survivor rights.

"I was proud to lead the landmark legislation at the federal level that became law in 2016, and I’m equally as proud of Democrats in New Hampshire who followed my lead to match that commitment at our state level. Now that my bill with Sen. Grassley is law, other states will have the resources necessary to follow New Hampshire’s lead and implement survivors’ rights, ensure accountability and strengthen our justice system."

Amanda Nguyen, founder of Rise, an activist organization, said, "Sexual assault survivors deserve access to justice no matter what state they live in. We are grateful to Sens. Grassley and Shaheen for their leadership on this issue, for centering survivors throughout this process, and for continuing to push these critical measures forward."

The first bill came about in 2016 after work by Grassley and Shaheen.

"The legislation guaranteed rights for survivors of sexual assault in federal cases and led to 21 states adopting similar legislation," Grassley's announcement said. "The bipartisan Survivors’ Bill of Rights in the States Act builds on the legacy of the initial legislation by ensuring that all survivors, not just those in federal cases, are protected."

Among the issues addressed are the "The right not to be prevented from, or charged for, receiving a medical forensic examination," "The right to have a sexual assault evidence collection kit or its probative contents preserved without charge for the statutory limitations period or 20 years, whichever is shorter," "the right to be informed of results of a sexual assault evidence collection kit" and an opportunity to challenge and delay the destruction of evidence proposed by the government.