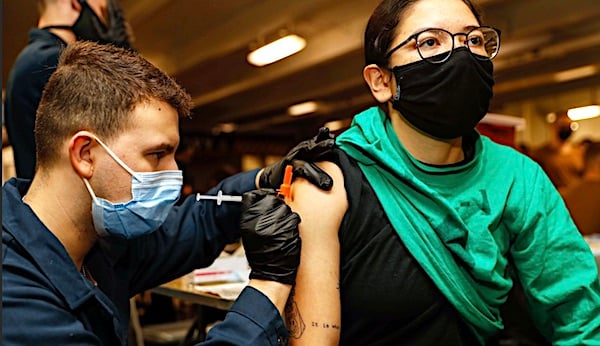 Service member Sandra Lugo receives a COVID-19 vaccine booster during a shot event in the foc'sle aboard the USS Abraham Lincoln in the Pacific Ocean, Jan. 5, 2022. (U.S. Navy photo by Seaman Jett Morgan)

The FDA is now recommending Americans take annual COVID booster vaccines much like the flu shots that are made available every year, but selling that plan to a skeptical public will be increasingly difficult as doubts about the booster shots grow.

One prominent doctor said outside of people with multiple extreme health issues like obesity and diabetes, "nobody ... should take" the booster shots, and even those high-risk patients should "weigh the pros and cons" before getting injected.

"The Food and Drug Administration on Monday proposed a simplified approach for future vaccination efforts, allowing most adults and children to get a once-a-year shot to protect against the mutating virus," reports the Associated Press. "This means Americans would no longer have to keep track of how many shots they’ve received or how many months it’s been since their last booster."

The new FDA guidance, which, according to AP, hears from a panel of "outside vaccine experts" Thursday, echoes President Biden's call to get a COVID booster shot annually. Biden has ostensibly taken a total of five COVID shots already, Breitbart reports.

“If you’re fully vaccinated, get one more COVID shot. Once a year. That’s it,” Biden said during a speech made at "his imitation White House video set," according to Breitbart.

"In the latest documents posted online, FDA scientists now say many Americans now have “sufficient preexisting immunity” against the coronavirus because of vaccination, infection or a combination of the two," it reports. "That baseline of protection reportedly should be enough to move to an annual booster against the latest strains in circulation and make coronavirus vaccinations more like the yearly flu shot, according to the agency."

The government's plan comes amidst widespread reports of unexplained, heart-related "sudden deaths" and serious cardiac incidents of young, mostly male Americans, including athletes — which prominent dissenters like Dr. Peter McCullough assert are most likely linked to the vaccines' myocarditis and blood-clot side effects.

In a video interview with Just the News, former Yale epidemiologist Dr. Harvey Risch, another high-profile critic of the government's "safe and effective" COVID vaccine narrative, said outside of people with "who have multiple, chronic" health issues, "I would say there's nobody who should take" the boosters.

But even for those higher-risk people, potential risks may outweigh benefits of taking the booster injections, Risch said.

"For people, say, over age 65 or 70, who have multiple, chronic conditions, maybe they're obese, they have diabetes, chronic heart disease, kidney disease, maybe they've had cancer — things like that — [for] those people, I think it's uncertain. The vaccines can do damage to those people, too, but the vaccines may actually provide some benefit, at least for some months, in reducing the risks of a more serious illness if they contract COVID. So I don't think the data are particularly clear as to the risk versus benefit, in a quantitative way, in those kind of people," he told Just the News' John Solomon and Real America's Voice in the interview posted today.

"For everybody else, there's no benefit of taking the booster. The booster has lost its efficacy for the new [COVID} substrains that are circulating now. ...So it's already uncalibrated for what's circulating, and that means its efficacy as a booster is less," he said. "But still the original component of it and the generic value of it as a booster ... provides benefit for some shortish period of time that might not be outweighed by the risks of the booster itself in high-risk people in the first place."

But Americans are increasingly skeptical of the vaccines. Reports AP: "The [FDA] proposal comes as boosters have become a hard sell. While more than 80 percent of the U.S. population has had at least one vaccine dose, only 16 percent of those eligible have received the latest boosters authorized in August."

The pollster Rasmussen Reports is reporting that more than 30 million people have interacted with its tweet (shown below) that questions "the [CDC's] quantitative definition of the word 'rare'" with regard to side effects from the COVIC vaccines — indicating a growing gap between the public and the media narrative that the shots are overwhelmingly "safe and effective."

Update: Over 30 million Impressions so far of our question below on the CDC quantitative definition of the word "rare."

Meanwhile, Just the News is reporting that in its briefing documents for the upcoming meeting with vaccine specialists, the FDA made a "couple big omissions."

"Pfizer's promised study on 'subclinical myocarditis' in young adults who received its original booster, which was due Dec. 31 at the agency, and the 'stroke signal' the feds detected, then dismissed in elderly recipients of Pfizer's new booster are not mentioned," Just the News reported.

Both the CDC and FDA will make short presentations on the "effectiveness and safety" of the original and Omicron-targeting vaccines, according to the report.

Dr. Vinay Prasad is a UC San Francisco professor who has been highly critical of the government's failure to confront the significant vaccine-side-effect issue head-on. Prasad bemoaned Monday on his Substack page that at the upcoming FDA vaccine advisory meeting, "Conspicuously absent is information about subclinical myocarditis ... It’s sad the FDA once again neglects its duty to generate confirmatory data."

"Instead, we get this proposal for yearly shots ... . The average American will now only be tasked with getting a yearly unproven booster, and the primary series [the initial vaccines from Pfizer and Moderna] will be ignored. Kids and older Americans will have to get 2 doses of the bivalent shot and then placed on the perpetual booster train. Pfizer will keep earning billions," he wrote. 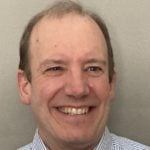 GOP policymakers in 1 state have chance for 'generational political realignment'