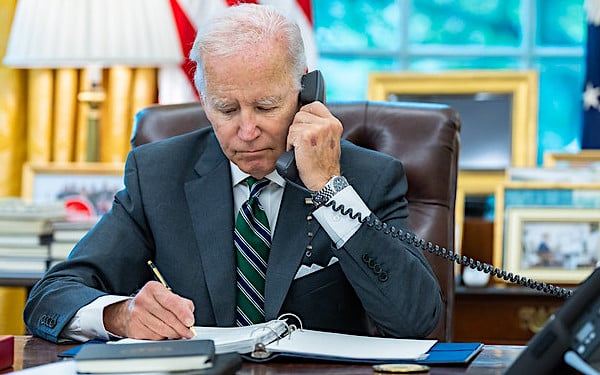 Joe Biden all of a sudden is all over the headlines for what he had, and where it was.

So far there has been confirmation of classified government documents found in an office for a China-linked foundation where Biden used to work, in his Delaware home garage, apparently next to his Corvette, and a third location.

A special counsel has been appointed to investigate how and why the government secrets were being stored in locations that were not legally approved. In fact, vice presidents cannot declassify material and it's a crime to mishandle it.

The papers apparently were from Biden's vice presidency, so they've been "loose" for a number of years already.

But now there's word on a fight over his OTHER papers: documents from his Senate tenure.

Judicial Watch says it has filed with the Delaware Supreme Court on behalf of itself and the Daily Caller News Foundation.

The watchdog is seeking to overturn a lower court's ruling that the records covering Biden's Senate career cannot be released.

There are an estimated 1,850 boxes of archival records from Biden's 36 years as a member of the Senate.

"The University of Delaware has been sitting on Biden’s Senate records for more than 10 years and is desperate to avoid any scrutiny of its secret deal with Biden to hide these records," charged Judicial Watch President Tom Fitton. “The latest revelations about Biden’s handling of ‘classified’ records raise even more questions about what Biden is hiding."

In 2020 the two organizations filed a Freedom of Information Act lawsuit in Delaware to obtain access to the record of a longtime senator.

The university had refused to release anything, and the lower courts agreed.

An appeal now asks the higher court to reverse, even though the school claimed no public funds were used protecting the stash of papers.

"The Supplemented Affidavit is nothing more than a document filled with stale hearsay and vague [assertions without proof] which at best shows that the university did not engage in a diligent effort, as required by law, to review Appellants’ Requests. Appellants identified the deficiencies and asked to vet the assertions themselves. The Superior Court, however, simply granted the university 'do overs.' Even after multiple attempts, the university has still not carried its burden to prove that the requested records are not subject to FOIA," the case argues.

Judicial Watch and the news foundation now are seeking discovery "to include at [a] minimum, a deposition of a representative of the university and production of documents … Alternatively, the court should remand this case with instructions to order the turnover of the requested documents since the university has had more than adequate opportunity to satisfy its burden."

News foundation spokesman Micahel Bastasch said, "On day one, the White House said President Biden was committed to bringing 'transparency and truth back to government.' Apparently, the University of Delaware didn’t get the memo.