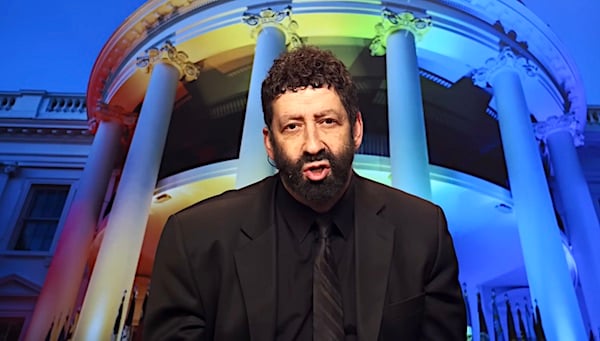 Messianic rabbi Jonathan Cahn, who famously warned Joe Biden when he became president to follow God's laws or see America's blessings vanish, now is insisting that Biden prepare himself for the time that will come that he will face God.

"The day will come that you will stand before God and you will have no more position, no administration, no government, no media and no public opinion. It will just be you and Him, and He will ask you to give account of what you did, what you did with regard to His Word and His ways."

"Mr. President, the hour is late and eternity is soon coming. Repent and turn to God. The only hope yo have, and all of us have, is salvation."

Cahn noted he had asked Biden when he took office how he could place his left hand on a Bible, and then with his right hand sign laws that "war against the Word of God."

The issue at that point was the abortion-promoting agenda that Biden was pursuing. The latest video notes Biden's celebration of the misnamed "Respect for Marriage Act" that declares marriage to be whatever two people say.

Cahn cited his warning about following God's laws, or breaking them.

"Now you've done it," he said, citing Biden's decision to officiate over a ceremony that altered federal law.

"You did something no president had ever done," which was enshrine an alternate to marriage into federal law.

The rabbi recalled that there was a U.S. senator who insisted "marriage is between a man and a woman."

That senator was Joe Biden.

"You repeated it for emphasis," Cahn said.

"Yet now, on the White House lawn, you signed a law that declared a marriage is not between man and a woman."

He demanded, "How do you sign into law that which clearly wars against … the Word of God."

He asked bluntly whether Biden was "setting the American government against Christians and those of faith."

Cahn's earlier message had cited George Washington's comment, on his inauguration, that, "The propitious smiles of heaven cannot be expected on a nation that disregards the eternal rules of order and right that heaven itself has ordained."

He warned a decision to abandon the teachings of God will result in America's blessings being removed.

Since he's been in office, Biden has overseen inflation of up to 9.1%, sky high fuel costs, an open southern border drawing millions of illegal aliens to America, an unstable relationship with foreign powers, shortages of medicine, radical ideologies forced on schools and members of the military, and much more.

Cahn, on Biden's ascension to the White House, noted the pattern of God's judgment from the Old Testament that he discovered were remarkably repeated in the Sept. 11, 2001, attacks, including on the spot where George Washington stood and prayed on the day of his inauguration. For Israel, he noted that after such a warning, there was a window of time of 19 years to return to God before judgment, or "great shakings" began. Clearly, 19 years after 2001, America suffered a year of "great shakings."

He directed his words to the current president.

"Mr. Biden, you have called for unity and peace. But how can a nation have unity and peace when it wars against the very foundation on which it stands?" he said.

Cahn said the nation can't have unity and peace when it has "turned against the God who brought it into existence."

Addressing Biden, he asked how the president can place his left hand on the word of God "and then with your right hand sign laws into existence that war against his word?"

"How can you invoke the name of God in your oath and lay your hand upon his word and then implement laws that will suppress the going forth of his word, that will censor his word and those who advance it?" Cahn asked.