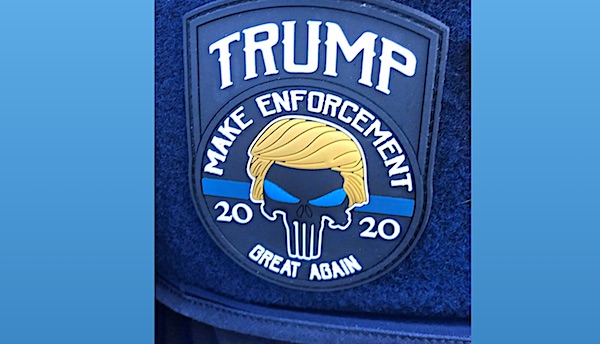 NYPD Sgt. Dana Martillo wore this pro-Trump patch while on duty during a Black Lives Matter protest on Feb. 5, 2021.

NYPD Sgt. Dana Martillo filed a lawsuit against the NYPD Tuesday, alleging that she did not receive a fair internal trial after the department docked her vacation for a month and suspended her for wearing a “Make Enforcement Great Again” patch while on duty, according to the New York Post.

Martillo came under investigation after a video showed her wearing the patch while on duty during a Black Lives Matter protest in 2021 and was eventually suspended and lost 30 days of vacation after an administrative trial found her guilty of promoting political statements as an officer, according to the Post. Martillow argued in the lawsuit that her trial was “very biased and politically motivated.”

The lawsuit claims Martillo was taken aback by “the level of dishonesty, political bias, and bad faith that would so infect this entire administrative disciplinary process, due to the total control that the mayor as chief executive has over the New York City Police Department and the ‘Kangaroo court’ in which [she] was forced to mount her defense to these trumped-up charges (pardon the pun),” according to the Post.

NYPD Commissioner Keechant Sewell tweeted that officers “must remain apolitical” after the department announced that it was looking into reports regarding Martillo’s patches.

Members of the NYPD must remain apolitical — it’s essential to public trust & officers’ ability to perform their jobs. https://t.co/zsTskDO10Z

Martillo states in the lawsuit that the patches were not political since Trump was no longer in office and had not announced a bid for reelection at the time of the protest, according to the Post. The lawsuit also claimed that Martillo was barred from submitting testimony from a polygraph expert and that the witness testifying against her had lied.

The patches had a Marvel comic character called The Punisher with Donald Trump’s signature hairstyle, and Martillo also wore a second patch of just the character, according to the Post. The Punisher character has also been used by the militia group the Three Percenters.

The mandatory suspension and docked vacation, the lawsuit read, was “so disproportionate to the offense as to be shocking to one’s sense of fairness,” according to the Post.

An NYPD spokesperson told the Daily Caller News Foundation that it “will review the lawsuit.”