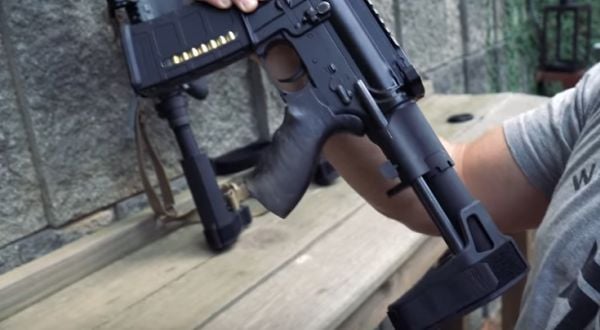 The Bureau of Alcohol, Tobacco, Firearms and Explosives’ (ATF) recently implemented pistol brace final rule could classify millions of gun owners as felons should they fail to comply with the updated requirements, according to the gun rights advocacy groups.

The rule, announced in January, will void all previous guidance on pistols braces, opting to redefine “rifle” as any weapon “designed or redesigned, made or remade, and intended to be fired from the shoulder,” forcing pistol brace owners, many disabled, to register their pistols as short barrel rifles (SBR) with the federal government. The ATF has allowed 120 days for gun owners with pistol braces to adjust the barrel longer than the required 16 inches, file a Form 1 to “make” the pistol a SBR, remove the brace, surrender the firearm or destroy the firearm.

“I mean, realistically, if you don’t register your gun with them in a certain timeframe and pay the $200 tax, you have to either destroy the gun, turn it in, or convert it somehow with a different barrel,” he said. There are currently between 10 million and 40 million gun owners who use pistol braces and pistol-braced firearms in the U.S., according to gun rights advocate Gun Owners of America (GOA).

The rule reclassifies pistol braces as SBRs, and if gun owners choose to leave their pistols as is, they will need to pay the $200 government tax stamp required by the National Firearms Act (NFA).

The ATF said that they may waive the fee, but they do not have the authority to do so, according to The Federalist. Pistol brace owners will need to complete one of the ATF’s provided options or they will face up to 10 years in jail and a potential $10,000 fine.

Should pistol brace owners decide to remove the brace from their firearm, they will need to destroy the attachment so that it cannot be reinstalled, according to the rule. The ATF has no authority to regulate braces separate from a firearm, according to the National Rifle Association (NRA).

The ATF Pistol Brace Rule has been submitted to the Federal Registry & will be published soon.

How many SHOT Show attendees will soon be felons? How many ATF agents are roaming the event pretending to be their friends?

Alongside implementing a restrictive new list of requirements for gun owners, the ATF may have violated proper procedure by creating their own definition of a “rifle” and SBR, according to Gottlieb.

“They really don’t have the authority to make these definitions. Congress didn’t give them that authority. Congress has defined what a firearm is, the ATF doesn’t get to do it,” he said. “Whenever the ATF makes their own rulings based upon their own feelings, gun owners are threatened in his country.”

Gottlieb noted that gun owners are especially targeted under the Biden administration, saying the administration is “using the ATF as a tool to try and implement their kind of control regulations rather than going to Congress passing laws.”

“In this case, you face more than gun control regulations. It’s gun confiscation regulations,” he continued.

Following the rule’s announcement, 48 GOP senators rallied together to condemn the pistol brace and rifle reclassifications, according to a letter sent to U.S. Attorney General Merrick Garland.

“The proposed rule is worse than merely abdicating your responsibility to protect Americans from criminals; you’re threatening to turn law-abiding Americans into criminals by imposing the largest executive branch-initiated gun registration and confiscation program in American history,” the senators wrote in the letter.