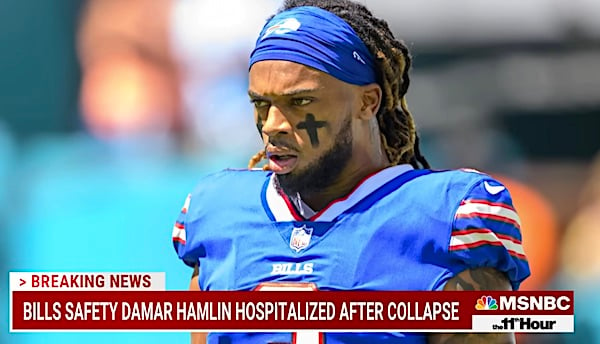 MSNBC coverage of Damar Hamlin's sudden collapse on the field during a 'Monday Night Football' on Jan. 2, 2023. (Video screenshot)

It perhaps has not been among most days' top headlines that dozens, no, hundreds of young healthy athletes have simply collapsed while competing in their sports over the past year.

They frequently are diagnosed as the victims of cardiac arrest and their average age is 23.

And the heart issues are coinciding directly with the rollout of the experimental COVID-19 shots that governments around the globe have been mandating.

But when such a collapse occurs on live TV, during a National Football League game between playoff contenders, there's much more alarm.

The report said Hamlin fell to the ground, apparently with cardiac arrest, around 8:55 p.m. EST. He was given CPR on the field, then taken by ambulance to University of Cincinnati Medical Center where he was in critical condition.

The report noted, "He initially stood up after dragging Higgins down but then fell backward to the ground before receiving CPR and then leaving in an ambulance around 9:25 p.m."

The report said, "Immediately after Hamlin collapsed, multiple players were visibly shaken and in tears. Players, coaches, and staff members gathered in a circle to pray for Hamlin."

While Hamar's vaccination status was not known, and was not necessarily public anyway, a report at the Gateway Pundit noted the fact that "athletes across the world have been dropping life flies as they compete in games."

"If they aren’t passed out cold, they are seen gripping their chests in agony, unable to breathe due to sudden cardiac events that hit in the heat of the competition," the report said. "This wave of heart issues is unprecedented, to say the least. Never before have we seen young, healthy, world-class athletes experiencing heart issues en masse like this. It has never happened, ever. Furthermore, the timing of this sweeping phenomenon could not be more relevant, coinciding perfectly with the rollout of the experimental COVID-19 vaccines.

The report quoted One America News with the revelation that "a jaw-dropping 769 men and women" have collapsed of heart issues during competition between March 2021 and Mach 2022.

The report charged, "Considering the timing of this never-before-seen issue in healthy athletes, and the universal push for COVID jabs, all signs point to one culprit: the experimental vaccine."

It was OAN’s Pearson Sharp who reviewed various investigations.

Sharp reported on a couple of tennis players, and wrote, "These are just two of more than 769 athletes who have collapsed during a game on the field over the last year. From March of 2021 to March of this year. The average age of the players suffering cardiac arrest is just 23-years-old. How many 23-year-old athletes were collapsing and suffering heart attacks before this year? Do you know any 23-year-old people who had heart attacks before now?"

He noted that these are the "known" cases and there may have been many that were unreported.

"Nearly 800 athletes – young, fit people in the prime of life falling down on the field. In fact, 500% more soccer players in the EU are dropping dead from heart attacks than just one year ago," the report said.

"When the Pfizer vaccine is known to cause heart inflamation? No. In fact, many doctors treating these players list their injuries and deaths as being directly caused by the vaccine… This is not a coincidence – healthy teenagers dying after getting the Pfizer injection. Doctors warned the FDA before they released the experimental vaccine that it would 'almost certainly cause terrible organ damage.'"