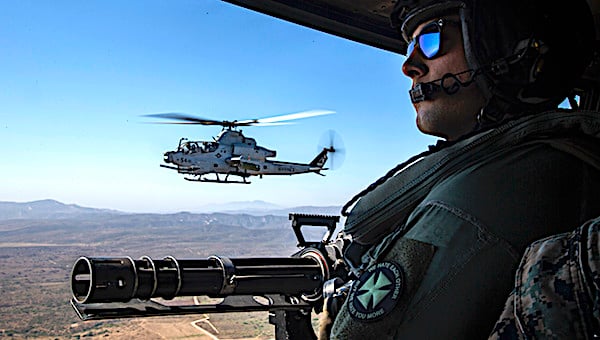 When Joe Biden orchestrated America's rout in Afghanistan, where he left behind hundreds of Americans and billions of dollars worth of U.S. weaponry, the Taliban took ownership.

Now a report at PJMedia documents there's a buyer, someone who wants to acquire those guns, Humvees, even helicopters.

The actual value of the arms and supplies Biden left behind when he abruptly ordered the pullout of American troops from Afghanistan isn't known.

What is known is that the figure runs into the billions of dollars.

And those weapons now "are on the negotiating table between Russian strongman Vladimir Putin and Afghanistan’s Taliban government, according to at least one insider," the report explained.

The report revealed,. "Presidentish Joe Biden’s bungled bugout from Afghanistan resulted in a windfall for the new radical Islamic government, including artillery, attack helicopters, and thousands of HUMVEES, machine guns, radios — all left behind as our orderly withdrawal degenerated into a rout."

The official guess on the part of the Department of Defense is that $7.12 billion in arms was handed over to the Taliban.

"Now Putin is reportedly offering to buy whatever he and the battered Russian Army need," the report said.

Joe Biden delivers remarks on the situation in Afghanistan, Monday, August 16, 2021 in the East Room of the White House. (Official White House photo by Adam Schultz)

The information apparently comes from a report on a social media platform popular with Russians.

"Putin is overseeing negotiations with the Taliban to recognize the Taliban government. In return, the Russian leadership is offering a major arms and military equipment swap," the site charged.

The Taliban would be willing to give up the equipment, the report explained, because ammo, spares and replacements for the American stockpiles would be hard for them to obtain.

Of course, Russia would face that same dilemma.

But the report said "every little bit probably" helps Russia in its war against Ukraine.

"If the deal goes through, there’s the added bonus of a diplomatic coup against the Biden administration’s ineptitude — not to mention the further embarrassment of Ukrainian soldiers and civilians being killed by American weapons," the report said.

The report comes amid other reports that the U.S., Germany, Poland and the U.K. are in the process of sending modern battle tanks like the M1 Abrams and others to Ukraine.