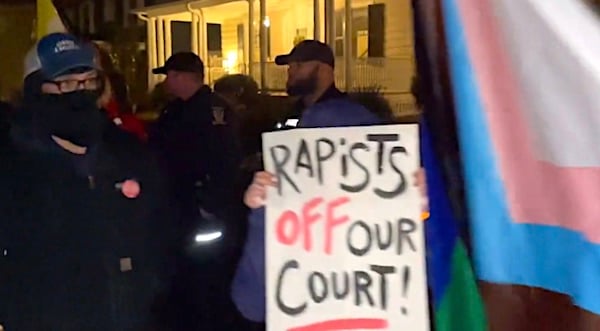 The anniversary falls only days after thousands of pro-life activists gathered in Washington D.C. to celebrate the Supreme Court overturning Roe in the Dobbs v. Jackson Women’s Health Organization in 2022. Protestors with Our Rights D.C., a group that organizes left-wing protests, stood on the sidewalk outside Kavanaugh’s home, calling for Kavanaugh to be removed from the court and the reinstatement of Roe, according to the Daily Signal.

Join us Sunday, 1/22 @ 5:30pm for the 50th Anniversary of Roe v. Wade. We’ll march in Kavanaugh & Roberts’ neighborhood, and then head to a fundraiser concert for DC Abortion Fund!

Protestors chanted “cut his time short, rapists should not rule the court,” according to the Daily Signal. The group was referring to the sexual assault allegations brought by Dr. Christine Blasey Ford during Kavanaugh’s confirmation hearing in 2018.

Are Supreme Court justices influenced by protests outside their homes?
28% (11 Votes)
72% (28 Votes)

Federal marshals were stationed outside the justice’s home but did not remove the protestors from the area despite 18 U.S. Code 1507 prohibiting protesting “in or near a building or residence occupied or used by such judge, juror, witness, or court officer,” according to the Daily Signal. The marshals explained that as long as the protesters remained on the public sidewalks, they had the right to protest.

On Jan. 18, Our Rights D.C. announced that they would be protesting outside of both Kavanaugh and Chief Justice Robert’s homes on the 50th anniversary of Roe, according to the group’s Twitter account. The group was supposed to attend an abortion fundraiser after protesting.

Join us Sunday, 1/22 @ 5:30 pm for the 50th Anniversary of Roe v. Wade. We’ll march in Kavanaugh & Roberts’ neighborhood, and then head to a fundraiser concert for DC Abortion Fund!

Some marshals told the Daily Signal that they were concerned Sunday’s protest would lead to more protests in the neighborhood and spark riots and unrest like during the George Floyd protests of 2020. Some also thought the protestors were trying to get arrested to be viewed as “martyrs” for the cause.

The U.S. Supreme Court and Our Rights D.C. did not respond to the Daily Caller News Foundation’s request for comment.