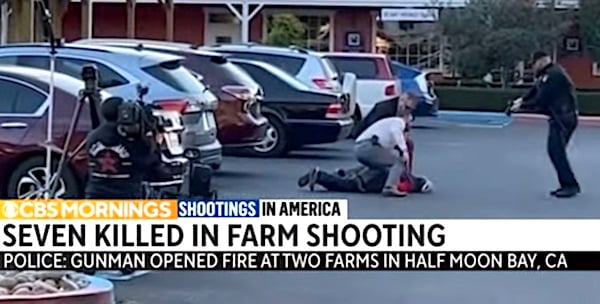 Police arrest a suspect in a mass shooting in Half Moon Bay, California, on Monday, Jan. 23, 2023. (Video screenshot)

The 67-year-old suspect in the Half Moon Bay shootings has been arrested, and San Mateo County Sheriff Christina Corpus said one person was in critical condition at a hospital, NPR reported. A 72-year-old man shot and killed 11 people and injured many others Saturday in Monterey Park, California, before killing himself, with authorities finding hundreds of ammunition rounds, a rifle and homemade suppressor-making material at his residence, they said.

Corpus said the Half Moon Bay shooting victims were believed to be nursery workers, but no motive had yet been determined, according to NPR. The shooter acted alone, the Sheriff’s Office indicated.

“We are shook and very eager to gain more information from the authorities and their investigations,” Concord Farms, one of the shooting locations, told CNN. “Our hearts are with the victims, their families and the Chinese American community – from Half Moon Bay to Monterey Park.”

Will the political left be successful in enacting more gun control based on recent mass shootings?
19% (8 Votes)
81% (34 Votes)

A Jan. 16 shooting in Central California took the lives of six people including a 17-year-old mother and her baby, according to The Associated Press.

The San Mateo County Sheriff’s Office did not immediately respond to the Daily Caller News Foundation’s request for further comment.