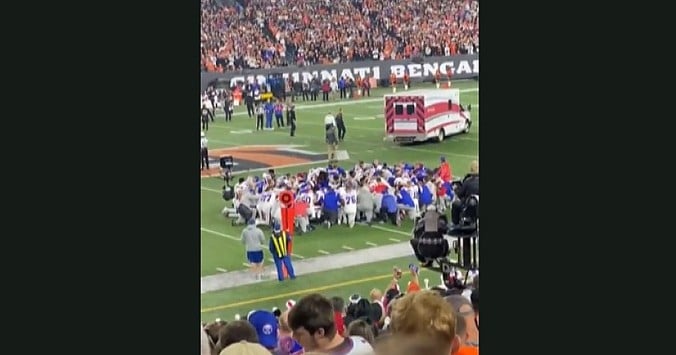 Across America, millions of us who don't follow football experienced the shock and sadness of hearing that a young man in his prime suddenly collapsed on the field Monday night when his heart stopped. The entire stadium of 65,000 Bills-Bengals fans went silent.

Then something amazing unfolded that could affect America in a profound way.

Most of the country, young and old, started seeing those video clips of the whole Buffalo team kneeling at midfield to pray for Damar Hamlin, the Bills' 24-year-old safety. Of course, millions of Americans had watched live as this moment of faith unfolded.

Along with the images of men kneeling in prayer, I was touched by seeing a black player (Tre'Davious White) hugging a white player (Mitch Morse), both grieving for their young teammate, now with his whole future in question, not to mention his life.

Different images from earlier NFL games came to mind – pictures of a different kind of kneeling, players "taking a knee" in angry protest. For many Americans this only made the anger worse, the pain deeper and racial division wider.

I thought back to all the pain of that division in 2020, back to images of fury in the streets after the George Floyd killing. But now what we saw was the opposite, different races hugging for the sake of the shared love they had for an NFL brother.

So which of these two images is the real America?

Admittedly, race relations in the news have seemed worse than ever, especially during the recent election cycle. This is particularly odd since there are so many examples of racial unity, and not just in our sports or our military.

I was born and raised in New York City, where I now reside. But for over 20 years I lived in conservative rural America, leading hundreds of mostly white Christians to improve our community in various ways.

I now work with many Christians here in Manhattan, including with two predominantly black churches in Harlem that, along with others, seek to counsel young men in trouble with the law.

What I see in the cultural/political media regarding racism bears no resemblance to my "lived experience," whether in rural or urban America. I don't think I'm alone in noticing this.

Here in the city streets, I see people of all races being polite to each other, holding buses for others, or making room on the subway for someone to squeeze in. Overall, when we relate in public I see mostly smiles, not frowns.

For example, not long ago I was lugging a bunch of boxes on a cart that overturned in the middle of a busy New York day. Suddenly I was surrounded by helpers of different races who quickly set things right. Those of us who live here know this is not unusual.

And yet, in the media we see disagreement and anger. We don't usually see the races getting along.

In fact, we don't see the best example of "antiracism" right in front of us – Christians of all races and ethnicities doing what they do every day, working together to improve their communities, whether making up Christmas boxes of food for needy families or just doing their best to love their neighbors and be responsible citizens.

The impact of millions of Christians from all walks of life – and of every race – working and praying together is America's best kept secret, thanks to the media. But now more than ever we need inspiring examples of racial harmony. They are everywhere if we'd only look.

The reaction to Monday night's NFL tragedy became something the media couldn't ignore.

Those teammates praying together on their knees while a whole stadium watched quietly spoke the truth. We are still a people of faith, and our faith teaches us that the heart of a person has nothing to do with skin color. We know this, but sometimes we forget and need reminding.

We got that reminder this week – many millions of us. Together we saw a glimpse of who we really are as Americans.

We are all praying Damar Hamlin will recover. We know there's a chance he won't play again, depending on the damaged caused by lack of oxygen in those crucial moments. But his life is the important thing, and who he is as a man. His charity toy drive was aiming to raise $2,500. Grieving fans have already raised millions of dollars for "Chasing M's Foundation."

Considering we're just finishing the holiday season, let me finish with a New Year's wish for America, the only successful multiracial country in history.

I hope that 2023 will be the year we learn to express to each other what those men showed us about the better angels of our nature.

Bob Just
Bob Just is the founder and president of Concerned Families, which has been recognized in the Congressional Record, by the Bush 43 White House and by local law enforcement. Just is a veteran national talk-show host and can be reached at bobjust.com.
Taking the knee that matters
Love letter to America – no apologies
Growing up in the age of abortion
Democrats can save our party – by voting Republican
To my fellow Dems: Yes, vote -- but vote Republican!
See more...