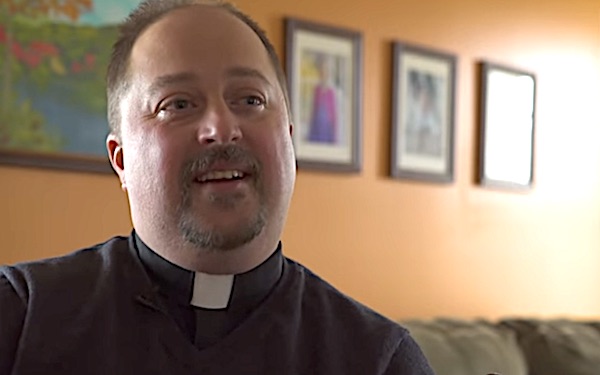 A pastor and his wife said people who identify as transgender are “divine” in a Facebook post over the weekend and called for Christians to join a campaign condemning transphobia.

The Rev. Chris Bruesehoff is a pastor at St. Michael’s Lutheran Church and his wife, Jamie, who describes herself as a “queer” “clergy spouse,” wrote that they were joining a campaign to combat transphobia in the church, according to a Facebook post. On Jamie Bruesehoff’s social media account, Chris Bruesehoff can be seen inside his church holding a sign stating “Transphobia is a Sin,” while his wife captioned the post “trans people are divine.”

Jamie Bruesehoff stated that her husband’s activism is “critical” as a “leader in the church.”

The Evangelical Lutheran Church of America is “consider one of the most inclusive and welcoming” Lutheran denominations toward the LGBTQ community, according to the Human Rights Campaign. The ELCA brought in its first transgender bishop in 2021, the Rev. Megan Rohrer, to oversee congregations in North Carolina and Northern Nevada, according to NPR.

The Bruesehoffs are parents of three children, one of which, Rebekah, was the focus of an episode of the television series “My Trans Life.” Rebecca claimed to like the color pink and girl clothes at a young age and learned about transgenderism at 8 years old, according to the episode.

Rebekah was uncomfortable with the idea of the “medical side” of becoming a man, and the Bruesehoffs were adamant that their child would undergo treatment to prevent “male puberty” from taking place, according to the Post Millennial. Rebeccas’s treatment included puberty blockers and cross-sex hormones.

“We were faced with a 7-year-old kid who wanted to die,” Jamie Bruesehoff said during the episode.

While many transgender activists argue that children who experience gender dysphoria and are not allowed to transition will commit suicide, some medical professionals who spoke with the Daily Caller News Foundation do not agree. Experts explain that studies claiming transgender suicide rates are often tainted due to only relying on “voluntary data” and the fact that those who take the survey are usually heavily biased toward pro-transgender beliefs.

Bruesehoff and the Evangelical Lutheran Church in America did not respond to the DCNF’s request for comment.