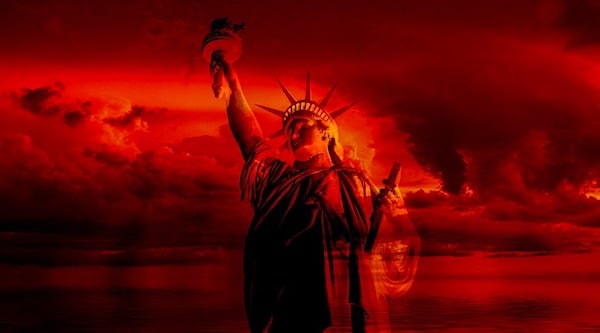 Democrats have claimed that President Trump, concerned parents at school-board meetings, and conservatives are the real threat to American democracy.

Those who doubt election results that include more votes than residents? Those who point out the unsound ideologies of mandatory COVID shots? Those who want parents to have a say in the curriculum their kids must endure at public schools?

All bad, the leftists accuse.

But Peter Hoekstra, U.S. ambassador to the Netherlands during the Trump administration, 18-year member of the U.S. House and currently a distinguished senior fellow at the Gatestone Institute, says the threat to democracy actually comes from another source: the U.S. government itself.

"There has been much written about the destruction of American democracy. Frequently the threat has been of alleged interference in U.S. elections by Russia, China or other state actors. Government agencies, the name of election integrity, were assigned to identify and disrupt these foreign intrusions. As more and more information is revealed about these agencies, it seems that America's Intelligence Community participated in these activities domestically, and in a way that poses a grave threat to both election integrity and American democracy," he wrote.

"Just last week it was revealed that the FBI again withheld pertinent information from the American public, for past two months, until after the November 8, 2022 federal election. As with the Bureau's reported cover-up of evidence influence-peddling reportedly found on Hunter Biden's laptop, agents knew, since November 2, 2022, about at least some of the three sets of classified material that illegally found their way into the garage and library of President Joe Biden and into the Penn Biden Center think tank at the University of Pennsylvania -- to which anonymous members of the Chinese Communist Party have donated $54.6 million."

The illegal handling of those government documents now will be the subject of a special counsel review, after Joe Biden claimed the secret papers had been secure because they were locked up in a garage with his prized collectible Corvette. Key Democrats immediately came up with the wild claim that Republicans had "planted" the documents.

Hoekstra noted, however, "In addition, the recent release of the 'Twitter Files' has raised at least two major concerns regarding actions by the Intelligence Community. The first is that the wall of separation between the Intelligence Community and the U.S. media has not only sprung a leak, it has totally collapsed. The report that officials from the Office of the Director of National Intelligence (ODNI) met weekly with Twitter executives to coordinate information is totally inappropriate. Would officials from the ODNI review, affirm or label certain sets of information as false? When ODNI was created, no one intended its officials to have a role in these types of discussions."

He noted the evidence already in hand – starting a few years back to then-Director of National Security James Clapper when he lied to Congress about whether the NSA was collecting data on Americans.

Then there was the work by Clapper and others, including then-FBI Director James Comey, ex-CIA Director John Brennan, to push unfounded claims about Russian operatives having compromising personal information about Trump into the public arena.

"Having this false information -- some of which the FBI actually altered -- in the public domain was evidently intended to damage Trump. The Russian 'hoax' allegations would haunt and damage the Trump presidency for almost two years," he explained.

"Today we know that the 'Russia hoax' was a lie. After a 22-month investigation, no evidence of collusion between any element of the Trump campaign and Russia was uncovered. The supposedly compromising evidence had never existed; the information in the 'Steele dossier' was false -- and the FBI had known it was from the start. The entire fabrication had been an attempt to attack and politically weaken Trump," Hoekstra explained.

Then in 2020, just before that election, "51 former intelligence professionals had even signed a joint letter stating that the Hunter Biden laptop had 'has all the classic earmarks of a Russian information operation.' They stated that their national security experience made them 'deeply suspicious that the Russian government played a significant role in this case.'"

Among those signing? Clapper, Brennan and many more.

"The fraudulent efforts by the U.S. government, Clapper, Brennan and the 49 others -- along with Hillary Clinton, her campaign committee, the Democratic National Committee and the suppression of the media and social media …to influence the public unfortunately met with some success. For almost two years, the authenticity of the material found on Hunter Biden's laptop was questioned. Today, its authenticity has been verified; the information is real and damning."

Then the Twitter Files, now being released, show the government actively participating in the social media company's decisions to suppress certain unwanted ideas, including the fact that the FBI paid Twitter $3.5 million for handling "requests" from the bureau.

"The American people should be outraged. This level of collaboration between federal law enforcement and a private sector company on controlling speech is terrifying. Having our Intelligence Community, which is supposed to be focused on foreign intelligence collection, involved is even more terrifying," Hoekstra said.

The questions now present themselves, including can the government be trusted, have federal agencies literally turned the law into weapons to use against political opponents, who authorized the "cozy" relationship between government and social media, and where are the records?

There must be, he said, an investigation of law enforcement, but most importantly, "we need to investigate how our Intelligence Community has evolved from having literally a non-existent relationship with speech in America to being inside the room determining what speech is allowed."